According to JLL's latest Hong Kong Property Market Monitor, the average rental rate of Grade A1 office buildings in Central Hong Kong grew 3.1% m-o-m in January 2016. It is the largest monthly advance since May 2011.

Central rents climbed 1.5% m-o-m to an average of HKD 103.9 per sq ft last month. The strong growth in Grade A1 office rents was underpinned by the willingness of mainland corporates to pay a rental premium to secure office space. Demand from mainland corporates contributed to Hong Kong's Grade A office rents surging 13.3% in 2015, the strongest growth in Asia Pacific and ranked ninth across the 95 major markets covered by the JLL Global Office Index. 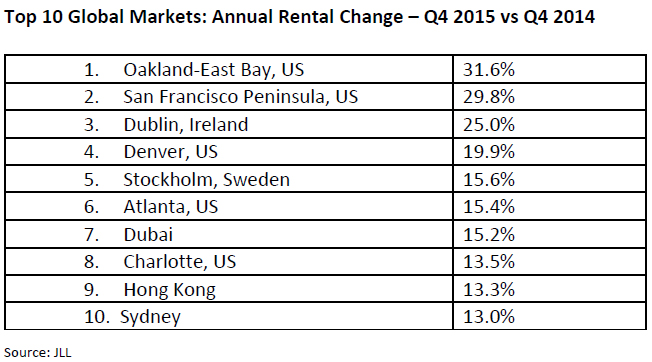 Alex Barnes, Head of Hong Kong Markets at JLL commented, "Demand levels have remained broadly constant despite stock market fluctuations. We continue to see steady demand from PRC firms, particularly in Central.  We believe this will continue through 2016 as the typical footprint of PRC firms is small, relative to the existing business base in Hong Kong. We expect the rents in Central to grow a further 5-10% this year."

Denis Ma, Head of Research said, "The strong start to the year for the city's Grade A office market even as a number of banks announced staff cuts underscores just how challenging it has become for tenants looking to secure premium office space in the city. With a number of mainland corporates still actively seeking to set-up and expand operations and the amount of backfilling (i.e. shadow space) in Central at its lowest level in five years, we expect rents to be well supported over the coming year."