Asia Dominates with 7 of Top 10 Most Expensive Markets Worldwide

According to CBRE Research's latest semi-annual Global Prime Office Occupancy Costs Survey, Hong Kong has become the world's highest-priced office market as Asia continued to dominate the list of the world's most expensive office locations, accounting for seven of the top ten markets. 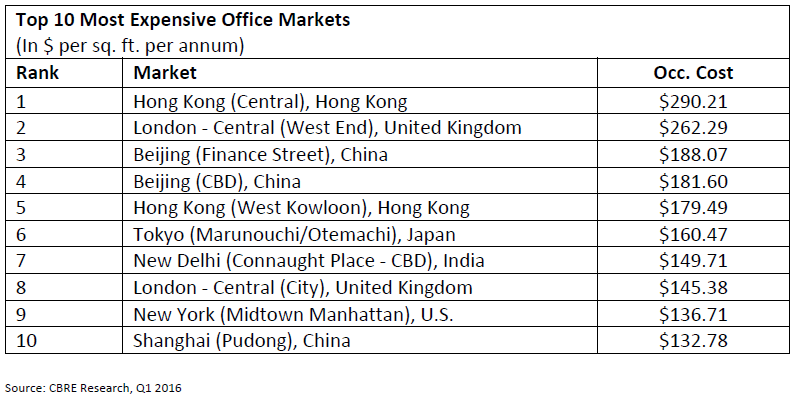 "We expect the global economy to keep growing, and the global service sector, the primary occupier of prime office properties, will continue to expand through periods of volatility," said Dr. Richard Barkham, Global Chief Economist, CBRE. "Since inflation is low, the growth in prime office occupancy costs is significant for both users and investors."

The service sector will show particularly strong growth in Asia as pensions and insurance products gain market share so occupancy cost growth will continue to trend upwards at a moderate pace.

The study found that the Hong Kong markets had the largest and third-largest year-over-year prime occupancy cost increase among the 126 cities surveyed--Hong Kong (West Kowloon) with a 19.5% increase and Hong Kong (Central) with a 14.2% increase, respectively.

Hong Kong (Central) is the only market in the world--other than London's West End--with a prime occupancy cost exceeding $200 per sq. ft. per year. Hong Kong's (Central) double-digit growth in occupancy costs was fueled by two factors: an ultra-low vacancy rate due to lack of new development and continued demand for high-quality space in prime locations by mainland Chinese companies.

"With low vacancy rates and lack of prime space in Hong Kong, this has allowed landlords to push rents upwards," commented Dr. Henry Chin, Head of Research, CBRE Asia Pacific. "Mainland Chinese financial firms have been seeking prime office space in Hong Kong to support their overseas business expansion and to cater for the clients' needs to manage their capital outside China."

The study also revealed that 22 markets moved more than three rankings upwards with 41% of these in Asia Pacific. The majority of these markets (72%) are not global gateway cities indicating that as rents continue to rise in line with economic growth, cost-conscious companies are seeking space in the less expensive markets. That 41% of the markets moving up are in Asia Pacific indicates that the region is still growing despite the slowdown in China.

CBRE tracks occupancy costs for prime office space in 126 markets around the globe. Of the top 50 "most expensive" markets, 20 were in Asia Pacific, 20 were in EMEA and ten were in the Americas. 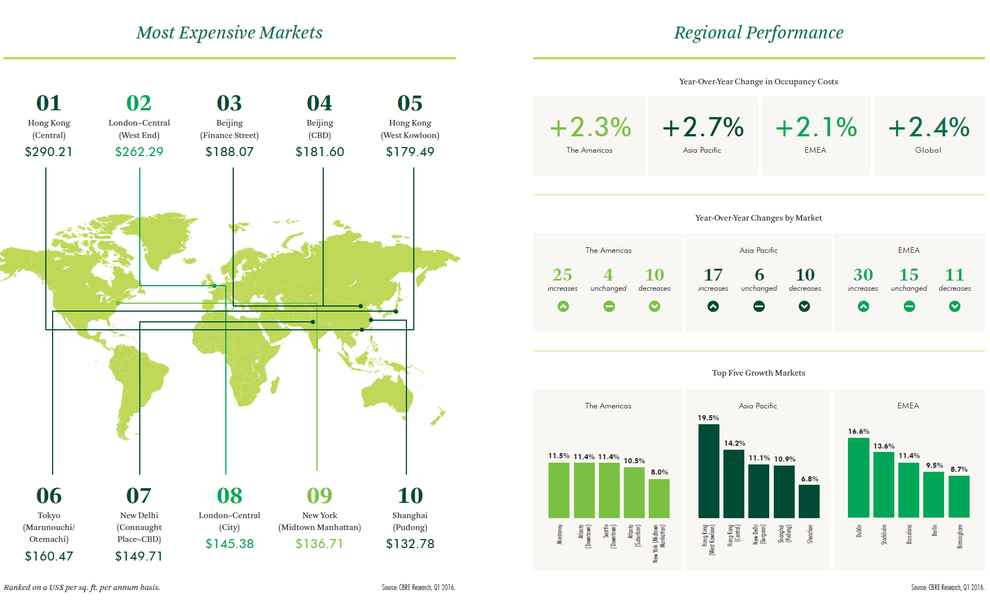