As reported in STR's Profitability Review, Japan's GOPPAR reached JPY12,512.18 in 2015, the country's highest GOPPAR value since the time of the global financial crisis in 2008.

STR analysts point to a clear correlation between the devaluation of the yen and Japan's increase in international arrivals. According to Tourism Economics, the country welcomed nearly 20 million overnight tourists in 2015, a 47% increase compared with the previous year. Of those arrivals, the main source markets were China, South Korea, Taiwan and the U.S. Currencies for the aforementioned countries all gained in value against the Japanese yen in 2015 (example: U.S. dollar, +14.4%), making travel to Japan cheaper.

Although the yen has regained some value in 2016, Tourism Economics is projecting an increase of 17.8% in overnight tourist arrivals for the year. In terms of hotel performance, Japan posted a 4.6% increase in revenue per available room (RevPAR) through the first nine months of 2016, driven by a 6.5% rise in average daily rate (ADR) to JPY15,226.89. Occupancy declined slightly (-1.8% to 82.0%) compared with the same year-to-date time period last year, but 2015 marked Japan's highest full-year occupancy level on record. Thus, the comparison base is exceptionally strong.

"Interest in Japan as a destination has dramatically increased in recent years," said Shiori Sakurai, STR's business development manager for Japan. "The extended period of cheaper travel to the country has created long-term benefits for the tourism and hospitality industries, which will hopefully continue as the yen picks up in value along with the demand increase of overseas travel from Asia to Japan."

Looking ahead, Japan currently has 61 hotel projects and 16,426 rooms in the three phases of the development pipeline (In Construction, Final Planning and Planning). Almost half of that development is in Tokyo, with 23 projects and 6,001 rooms, as the city prepares to host the 2020 Summer Olympics. 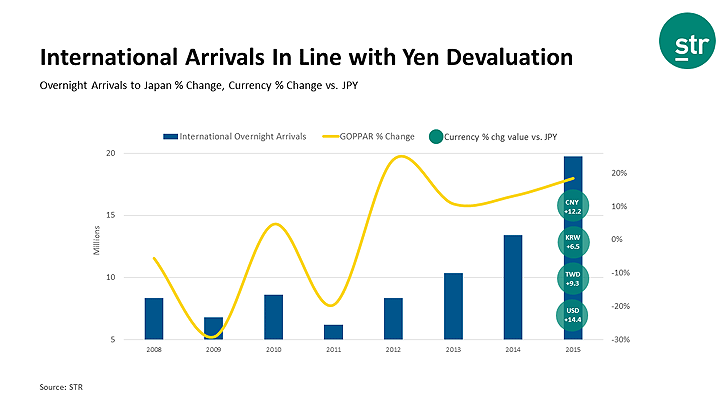