According to Knight Frank, Poland's strong economic growth is expected to continue, with unemployment forecast to fall over the next three years, and GDP continuing its upward growth. As such, commercial real estate activity in Warsaw, and throughout the country, is expected to strengthen in the next eighteen months.

Occupier demand for offices will remain healthy in the Polish capital, but with development activity and completion levels continuing to rise, vacancy rates may increase in the short-term. As a result, prime and average rents are to maintain their stability in the final quarter as the market remains in favor of tenants, and take-up could reach a 10-year high and exceed 700,000 sq m. 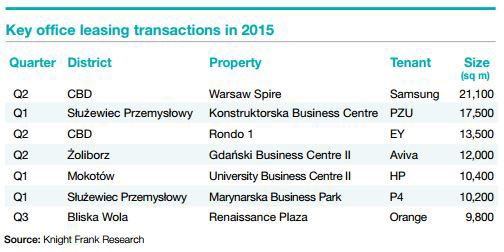 Following a weak start to the year for the investment market, large-scale deals set to close in Q4 will help to lift Warsaw's office volumes - transactions are not expected to exceed volumes achieved last year, though this is purely due to the limited availability of investment stock. Warsaw's office sector will continue to remain desirable, particularly with international investors, and as such, prime yields in the city may experience some downward pressure by mid-2016, reports Knight Frank.

Heena Kerai, International Research Analyst at Knight Frank said, "Despite office investment lagging leasing activity in Warsaw, investor sentiment remains positive. The lack of investment stock will remain a hindrance to the market, however, when an asset is available for sale, steep competition is likely to push prices higher than expected."