According to STR Global, Southern Europe reported a demand increase of 4.2 percent year-to-date October 2014, with the highest occupancy change (+3.6 percent) of all sub-regions in Europe.

As supply showed low year-over-year growth of 0.6 percent, average daily rate (+3.7 percent) and revenue per available room (+7.4 percent) were able to pick up and display a positive performance outlook for year-end 2014 and the start of 2015.

Spain and Portugal have reported RevPAR growth since 2011. The consistent demand increase for Spain (+4.8 percent) and Portugal (+6.6 percent) positively affected all performance measures as both countries were able to achieve RevPAR increases more than 10.0 percent. 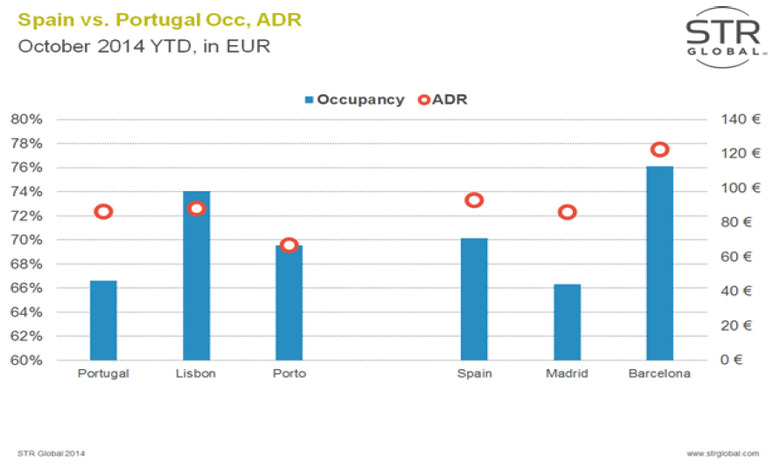 Portugal is performing at a lower ADR and occupancy level than Spain; however, RevPAR in Portugal increased at a faster rate (+12.5 percent). While the two major cities, Lisbon (+9.2 percent) and Porto (+11.4 percent), mainly increased occupancy, the Algarve region had the strongest ADR (+17.4 percent).

In Spain, Barcelona has been consistently performing with high occupancy and ADR levels, with comparable performance in the past year. The Balearic Islands and Canary islands were able to strongly increase ADR by 9.3 percent and 11.1 percent, respectively. RevPAR in Andalusia increased 10.5 percent to EUR58.78 as a result of positive growth in occupancy and ADR.