A new report by Christie + Co and STR Global finds that overheated competition and low yields in some Western markets are pushing investors towards secondary Central Eastern Europe (CEE) markets, where they will face less competition for deals and are able to negotiate attractive prices on assets.

While Bucharest, Sofia and Belgrade are among the largest cities in the CEE, their respective hotel markets are considered immature when compared to their European counterparts. 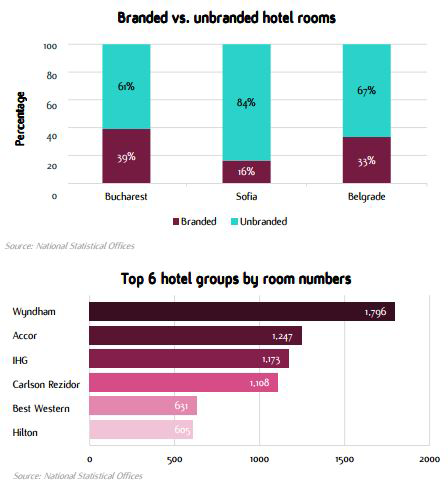 Lukas Hochedlinger, Managing Director of Germany, Austria & CEE at Christie + Co says, "Through our day-to-day conversations with our clients, it is apparent that investors are keeping an eye on the peripheral markets of Bucharest, Sofia and Belgrade. Western European players in particular are attracted by the cities' strategic geographical positions, Western style cultures and their highly educated yet affordable workforce."

The report reveals that the hotel markets of Bucharest, Sofia and Belgrade are chiefly dominated by privately operated hotels which account for a share of 61% in Bucharest, 67% in Belgrade and 84% in Sofia.

"In the past five years, Bucharest, Sofia and Belgrade have all witnessed growth - albeit from different starting points. Belgrade is facing the most difficult environment as the hotel sector is suffering from oversupply; Bucharest continues to draw opportunistic foreign investors, attracted by the growing potential of the business and leisure segments, and Sofia is charming more international players thanks to government steps to attract more foreign capital and promote tourism."

"All in all, it is apparent that these cities have a high growth potential; the remarkable growth that these markets achieved in the years prior to the financial crisis demonstrates their fundamental and enduring strengths."