In addition, USD-denominated ADRs started climbing up to 2014 levels (St. Petersburg Luxury segment ADR was the first one to cross the threshold, reaching USD316 in 2017 vs. USD312 in 2014). Luxury segment reports the lowest occupancy rates in Moscow and St. Petersburg (67% and 56% respectively) in comparison to other segments. The highest market weighted average Occupancy index for at least 6 years in Moscow - 74%. The only segment which lost in ADR this year was Midscale segment in Moscow.

"Overall the situation on the Moscow quality hotel market looked quite optimistic in 2017, however the growth slowed down three times in all operational indices compared to 2016", says Tatiana Veller, Head of JLL Hotels & Hospitality Group, Russia and CIS.

"Market wide weighted average ADR increased in 2017 vs. 2016 by 2.2% reaching RUB7,567 and occupancy improved by 1.9 ppt resulting in 74% of rooms being occupied in the Russian capital. This is the highest index in at least six years. RevPAR therefore increased by 4.5%, to RUB5,450", notes Veller. "The present slowdown in growth is probably a partial effect of a sizeable additional room stock being introduced to the market in 2017 (almost 1,800 rooms), much more than in 2016 (900 rooms), as well as of the extremely positive market dynamics of the three recent years." 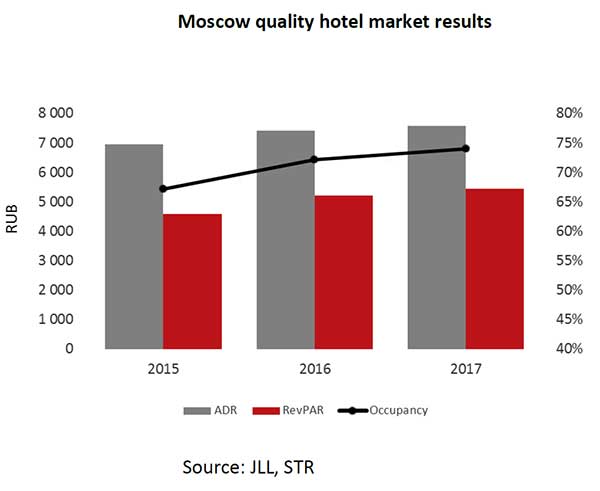 In terms of demand there has been an increase of tourists' arrivals to Moscow by 23% (17.5m in 2016 and 21.6m in 2017 according to the Mayor of Moscow Sergey Sobyanin), while the mix of international and domestic visitors remained like in 2016 (20% and 80%). Number of tourist arrivals to St. Petersburg has also increased by 25% resulting in 7.5m arrivals. The number of visitors here was equally split between international and domestic visitors.

Moscow continues to fascinate tourists by introducing more international events for business and leisure, creating extraordinary recreational zones. Festival Journey to Christmas has been reported as one of the most popular celebrations this winter by The Wall Street Journal. Simultaneously, Russia Tourism is working closely with ASEAN committee, which already resulted in more Chinese, Thai and South Korean tourists, for whom Moscow would always remain the primary destination in Russia as a cultural, economic and historic centre of the country. The increased number of Chinese tourists' coming on shopping tours has been additionally stimulated by ruble depreciation over the past three years. 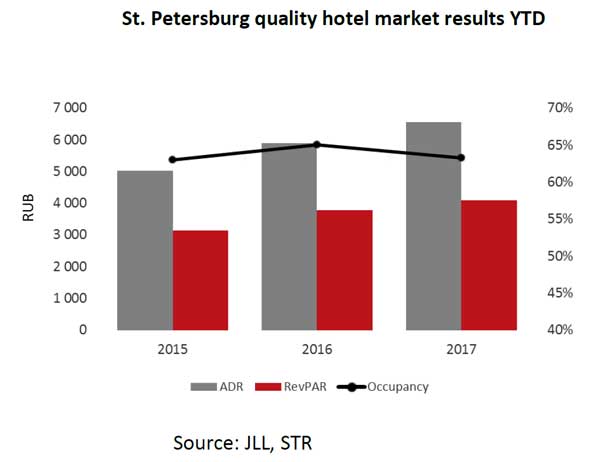 The front-runner in Moscow terms of occupancy rates is the Upper Midscale segment - 78.5%, closely followed by Upscale and Midscale. "At the same time, in 2018 we expect 1,092 rooms to be introduced into the market (mostly in the Upscale segment), and that could slightly affect the demand in 2019 and on" reports Veller. "The flattest increase has been seen in the Luxury segment, meaning the tourists are more likely to select the Upper Upscale hotels, rather than Luxury ones. Domestic tourists have been more price-conscious over the past few years, and international visitors prefer to spend more on the activities, food or shopping outside of the hotel rather than the room itself."

Despite an insignificant drop, number of occupied rooms in St. Petersburg remains high. This is due to revenue optimization techniques, which are widely practiced on the back of strong demand by branded hotels. In the Northern Capital, similar to Moscow, Upscale and Upper Midscale segments continue leading the pack in terms of occupancy indices, both above 70% (73.5% and 70.3% respectively), while Luxury segment reports the lowest proportion of sold rooms - 56.6%. Both Upper Upscale and Midscale segments are around 60%.

The only segment in Moscow, which lost in ADR this year, was Midscale, here rates shrunk to RUB3,822 which nevertheless due to occupancy rises resulted in RevPAR increase by 2%. Upper Midscale, Upscale and Upper Upscale segments report insignificant increases (from 1% to 3%) resulting in ADRs of RUB5,085, RUB6,404 and RUB10,442 respectively. The only sizeable increase reported in ADR (6.3%) was in Luxury segment (crossing for the first time in observable history a threshold of RUB18,000 (to RUB18,184), and thus driving a 6.8% RevPAR boost.

"All segments reported ADR growth in St. Petersburg. For the first time in history, Luxury hotels in St. Petersburg sold at a higher price than in Moscow - ADR in Northern Capital culminated at RUB18,445 level", says Veller. "An additional surprise was delivered by the Upscale and Upper Midscale segments, whose numbers differ from Moscow's by a meager RUB50 gap (reaching RUB6,381 and RUB5,036 correspondingly). Midscale ADR was RUB3,452 (around RUB350 lower than in Moscow)."

As JLL experts have highlighted in 2016, USD-denominated rates continue to rebound. "ADR index have not yet reached the numbers equal to 2014, last year of more or less stable domestic currency; however, this could be the case for 2018, mainly because of the hoteliers' anticipated ability to drive rates during the FIFA World Cup", says Veller. "The only exception to this rule is Luxury segment in St. Petersburg, which achieved the ADR of USD316, higher than in 2014 (USD312). Moscow's Luxury segment is also getting close (USD312 in 2017 vs. USD351 in 2014).

Despite the slight drop in occupancy by 1 ppt (to 48.7%), there has been an ADR increase by 3.3% (to RUB5,094) leading to RevPAR growth by 1.1% (to RUB2,480). ADR rise was especially notable in the first quarter of the year, probably because there have been more winter entertainment activities offered by the hotels, and they became the weekend escape destinations for locals, as well as in September, when Muscovites tried to utilize the warm shoulder season by taking short breaks in the close vicinity of their main residences. 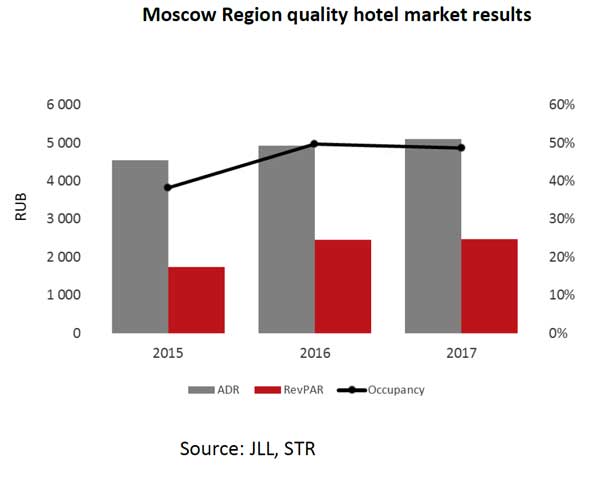 According to Tatiana Veller, in terms of hotel transactions, the market is stable. "There are hotels or aparthotels being offered for sale mainly because the owners are looking for liquidity to develop new projects or are exiting non-core assets" she comments. "The main notable deals for 2017 in Moscow were: Vesper buying a land plot for development of a luxury hotel (Fairmont) with apartments next to Mayakovskaya metro station; VTB Group selling Tourist and Ostankino hotels to Osnova group of companies, and Sovietsky hotel is rumored to have been sold. In St. Petersburg Alliance-Invest has sold apart-hotel project to St. Petersburg Construction Company in the second quarter of 2017."

"In 2017, the occupancy rates have mainly been growing in Winter and Fall (business seasons); this will be evened out by FIFA World Cup in Summer 2018. Both Moscow and St. Petersburg hotel markets look well balanced and satisfy the demand of different visitors' classes. The potential niche that seems still open is the quality economy hotels", says JLL's Tatiana Veller.


"We see the expansion of all three airport clusters in Moscow in terms of accommodation offer over the past years; that would continue in 2018", says Veller. "There will be two branded hotels opened in Vnukovo Airport: DoubleTree by Hilton Vnukovo (432 rooms) and Four Points by Sheraton Moscow Vnukovo Airport (250 rooms). Sheremetyevo airport will have a new entrant in the only category still missing there - quality economy under international management - Holiday Inn Express Moscow Sheremetyevo (198 rooms). 2018 has already welcomed a new player in the Domodedovo airport vicinity - ibis Domodedovo (152 rooms) opened in January."

"In terms of alternative accommodation product, there is an increased number of hostels being introduced, as well as aparthotels or serviced apartments. Interestingly, there is demand from the investors' side for branded residences and hotel-managed residences in different mixed-use complexes, where hotel is seen not as just the place to sleep for tourists, but as a focal point of the complex, serving many needs of the local community", concluded Veller.