"FIFA World Cup 2018 had the desired effect: the number of guests in hotels of cities that are traditionally in demand by Russian and international tourists has increased this summer. In Saint-Petersburg, for example, the occupancy broke a three-year record with market average result of 88%, says Tatiana Veller, Head of JLL Hotels & Hospitality Group, Russia & CIS.

Veller further commented, "Moscow hoteliers note an unprecedented growth of leisure tourists. In some hotels such guests even began to supersede business travelers. It is a major change for Moscow where the share of business flow has historically stood at 75-80% of total demand".

At the same time, the room rate dynamics were not so positive. In 2018 Moscow hoteliers, anticipating the demand of football fans and media, were able to set high prices within the limits allowed by law, but this year the rate fell due to the absence of a major international event of the World Cup level.  As a result, a decrease in ADR was observed in all markets. However, Moscow lost the most ground - here the room rates fell by slightly more than half.

In the Russian capital from June to August the market average occupancy was 87.4%, growth of 2 ppt vs. previous year (85.6%) despite the fact that Moscow served as a main hub for mundial guests last summer, and 6 ppt higher than in 2017. The Upper Upscale segment players here were the most popular with 92% of the rooms sold.

However, ADR fell by 55%, to RUB 7,100, while the decrease in RevPAR was 54%, to RUB 6,200.  At the same time, the strongest decline was observed in the Luxury segment. Here hotels dropped prices by 61%, to RUB 20,900 and thus became 30% cheaper than their counterparts in St. Petersburg. However, comparing this figure with the previous period without the World Cup (summer of 2017), we can note the ADR increase by 20%.

"Moscow region branded resort hotels were able to increase the occupancy this summer by healthy 13 ppt, to 63%. Last year the mundial held back traditional tourist demand; people preferred to attend the World Cup events and stayed in the city. This warm season, the attention of Muscovites, who are accustomed to classic country vacation, turned back to the facilities "in their backyard". The main growth occurred in June. In the first month of this summer, more guests (by 8 ppt) arrived at the Moscow region hotels than in June 2018. ADR only fell marginally compared to a year earlier - by 13.5%, to RUB 5,700." comments Tatiana Veller.

"This summer pleased St. Petersburg hoteliers with the explosive growth in the number of tourists, something the market was waiting for. Hotels welcomed 15.5 ppt more guests compared with last year and 4 ppt more vs. summer 2017.  The average market occupancy was 88%. Traditionally the most popular segment is the budget-friendly one, which is primarily in demand with organized tourist groups. These rooms in the Northern Venice were 91% sold during the entire season; that is a record result over the past three years. Due to the occupancy growth in this segment, the RevPAR also increased by 15%," noted Veller.

In the Luxury segment of St. Petersburg, the prices held rather steady vs. year - decreasing by 1.5%, to RUB 30,500. Guests of the premium segment were more interested in the market due to large business events such as SPIEF, and the absence of football fans played the role. The occupancy here increased by 7 ppt and reached 77%. Consequently, these factors led to an increase in RevPAR by 12% (to RUB 23,700).

The Russian all-year-round destination sold 6 more rooms this summer by the sea, up to 74% vs. last year. At the same time, ADR fell by 19%, to RUB 7,500. In Upscale segments with an average price at RUB 13,500, the occupancy was high and amounted to 72%. However, the main increase in occupancy was driven by the "affordable price segment" players, with 75% of rooms sold at about RUB 3,600 as ADR. Having said this, we estimate that in large "all-inclusive" hotels of the Imereti lowland (which we don't include in the statistics), the occupancy was even higher.

"It is noteworthy that the mountain cluster even in a traditionally beach season continues to compete healthily with their colleagues on the coast, with 69% of hotel rooms sold here (an increase of 5.5 ppt compared to 2018). This happens partly due their traditional low-price policy and nice discounts; the ADR in Krasnaya Polyana was RUB 3,300. In the Upper segments, the average room was sold for RUB 4,400, while in more budget-friendly hotels the rate increased slightly vs. 2018, and reached RUB 2,500 this summer," conclude Veller. 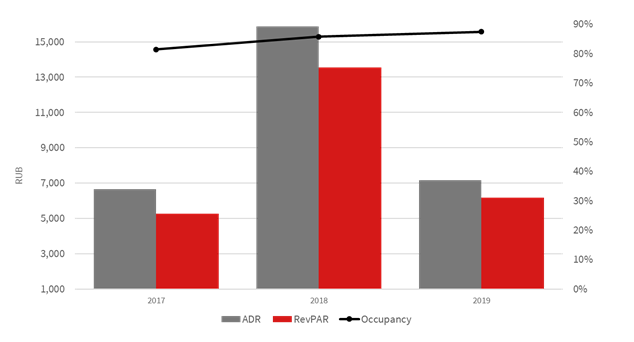 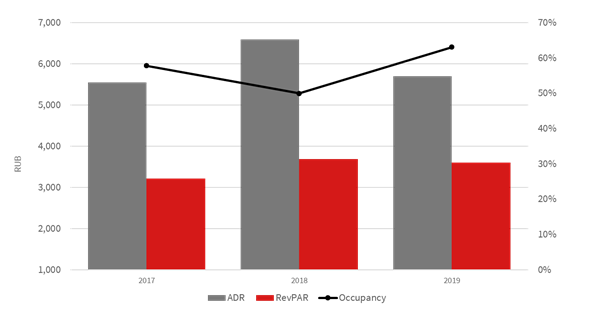 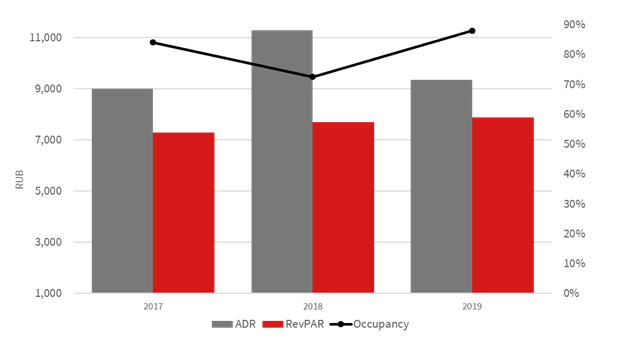