Based on CBRE's latest report, The Decentralization of the Seoul Office Market, reveals that a number of new and emerging business districts have begun to see stronger office leasing demand, including those from multi-national companies, supported by government-led initiatives to promote growth in cities around Seoul. 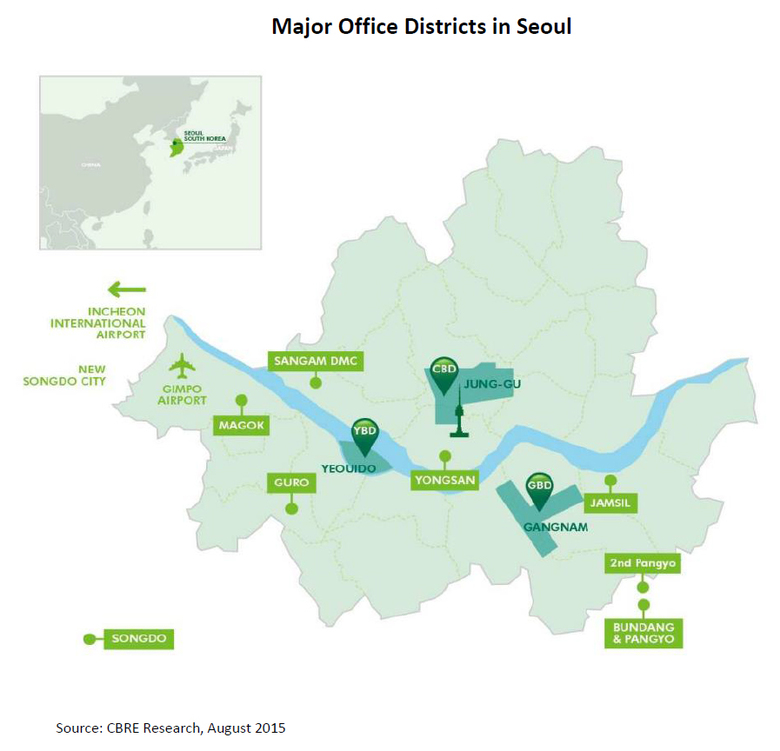 Dr. Henry Chin, Head of Research for CBRE Asia Pacific comments, "Driven by lower operational costs and improving infrastructure, multinational companies--particularly those from technology, media and telecommunications, research and development, and gaming--are choosing to relocate to Seoul's emerging decentralization districts, rather than the three main business districts of CBD, GBD and YBD. Many companies have been taking advantage of government subsidies and incentives to move into newly formed districts."

"Authorities have provided companies with tax incentives and other benefits to create research and development, and IT-focused clusters in areas such as Pangyo Technology Valley and Sangam DMC, a move which has prompted a number of companies to relocate from the original three business districts," adds Justin Kim, Director of Research and Consulting, CBRE Korea.

Another government-led driver of the decentralization trend--first proposed in 2003 and expected to be completed in 2017--has been the initiative to relocate numerous institutions, affiliates, subsidiaries and corporations away from Seoul to metropolitan areas across the country. To date, nearly 110 government-related institutions have been relocated from the CBD and GBD.

Mr. Kim says, "With the planning and construction of new transportation infrastructure by the Greater Seoul metropolitan council, which covers Seoul, Gyeonggi and Incheon, this has also helped facilitate the decentralization trend in the office leasing market."

With the government set to provide incentives and tax breaks, the wave of relocations from the major three business districts by conglomerates is set to gather pace in certain emerging hubs:


Even though Sangam DMC and Pangyo Techno Valley are now well-established alternative business districts, these areas are still only permitted to host companies operating in the M&E and technology sectors. Landlords will therefore find it challenging to attract tenants from the three major business districts in the short-term. However, as these limitations are gradually relaxed and removed, these two districts and other new areas will see stronger demand as more companies seek cheaper and better office space outside the main business districts.

CBRE recommends tenants to take advantage of the flight-to-quality opportunities as more Grade A office buildings will become available at lower rents in the emerging business districts.

"Given the current overhang supply issue in Seoul's office market, the decentralization trend will continue to put downward pressure on rents in the traditional three major business districts--CBD, GBD and YBD--in Seoul. Flight-to-quality will continue and we aren't expecting to see significant rebound in rents in the short-term," says Dr. Chin.

For landlords, owners need to adopt a more flexible attitude towards leasing negotiations and incentives in order to attract new tenants in what is a very competitive market. Dr. Chin adds that landlords in established business districts should be prepared to compete with those in emerging areas--they will need to diversify their property portfolios by investing and developing office buildings outside of the three main business districts.