Global real estate consultant Knight Frank is reporting this week that a total of €8.8 billion ($9.6 billion USD) was invested in Spain's commercial property sector in 2015, which is the highest figure since 2008. 2015 was also a record-setting year in terms of investment volume in Spain, increasing by 13% compared to the previous year.

By sectors, offices and retail remain the most popular segments for investors. Shopping centres and High Street recorded €4.6 billion ($5.2 billion USD), accounting for 52% of investment. Offices accounted for €3.3 billion ($3.7 billion USD), representing 38% of investment. The logistics sector has grown exponentially, mainly due to the higher yields, reaching record levels of more than €850 million ($961 million USD) in 2015.

Nevertheless, hotels is close behind. This is for the strong recovery of the tourist sector - both national and international.

Humphrey White, Partner Head of Commercial Property Spain, commented: "Forecasts for this year suggest that investment levels will remain slightly lower than in 2015, although a greater number of transactions are expected. Essentially we are facing a lack of product, not investor demand."

By investor type, investment funds and SOCIMIs have been the most active, accounting for more than half of all investment (55%). Active in Spain since 2013, SOCIMIs have increased their market share to become one of the main players in the sector, driving the market in the process.

Nevertheless, we would note the gradual increase in private investors and family offices taking on more commercial property exposure. In 2014, private investment accounted for 5% of all investment, while in 2015 this figure reached almost 14%.

In terms of investor type, we would note that opportunistic investors have been gradually disappearing as the market has moved on. Prime and core plus investors have taken their place and have increased their market share (43% and 28% respectively), which traditionally operate in more stable and conservative markets. Value add investors are especially active, accounting for 27% of the market.

By country, the lion's share of investment has been carried out by local investors (47%), bearing in mind that SOCIMIs are considered local investors, despite the fact that much of their equity comes from international investors. France, the United States and the United Kingdom are still the main players in the Spanish commercial property sector. The Philippines stands out for the size of a sole asset investment (Torre Espacio, in Madrid for 558 million euros, or $630 million USD). 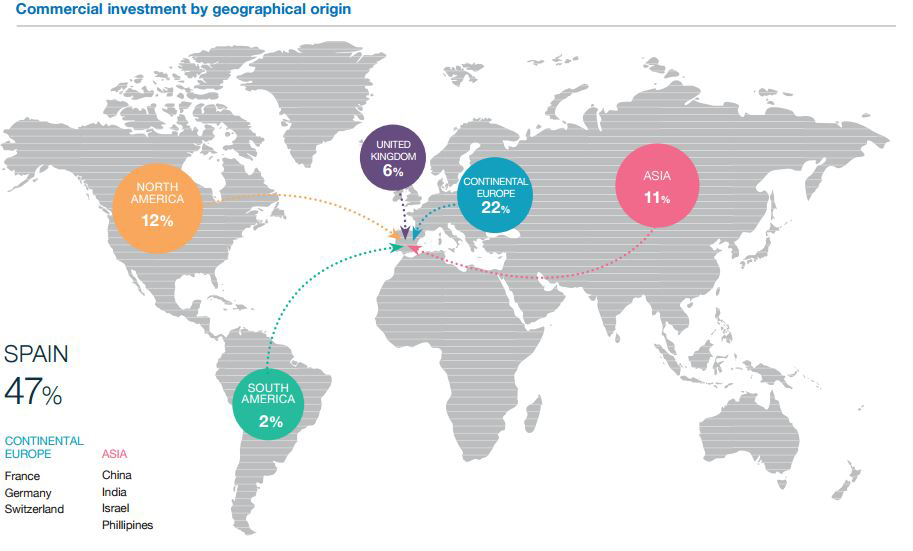