Hotel consultant STR is reporting this week that 2015 marked the first year since 2010 in which the European hotel industry passed hotels in the U.S. in year-over-year revenue per available room (RevPAR) growth.

Both the U.S. and Europe have reported six consecutive years of RevPAR growth since each experienced a double-digit decline following the financial crisis in 2009. From 2011 to 2014, the U.S. consistently experienced a higher year-end growth rate. In 2014, U.S. RevPAR growth reached +8.1% compared to +4.3% for Europe.

Despite recent safety concerns across Europe due to terrorist attacks and threats, which affected key cities including Paris and London at the end of the year, several markets in the region experienced strong overall performances in 2015. According to STR analysts, the weakened Euro and displaced demand from North Africa played major roles. European hotels reported exceptionally high performances in the summer months, reaching +9.9% RevPAR growth in June, +13.0% in July and +8.4% in August.

Major European markets with notable RevPAR growth for year-end 2015 include:

Europe's strong performance trend has continued into 2016, with the region finishing the month of January at +3.0% RevPAR growth versus +2.5% in the U.S. This also marks the first time since 2010 that Europe has opened the year with higher RevPAR growth than the U.S.

"Most European hotels had a fantastic 2015 and should be able to carry this momentum through to 2016," said Robin Rossmann, managing director for STR. "While the U.S. has maintained higher performances after recovering from the recession, Europe is definitely catching up and the future looks bright. While demand remains high in both markets, at 3.0% in the U.S. and 2.9% in Europe, it will be interesting to see how the high projected supply growth in the U.S. will put pressure on hotel occupancy, while Europe's supply growth trend remains slow and steady." 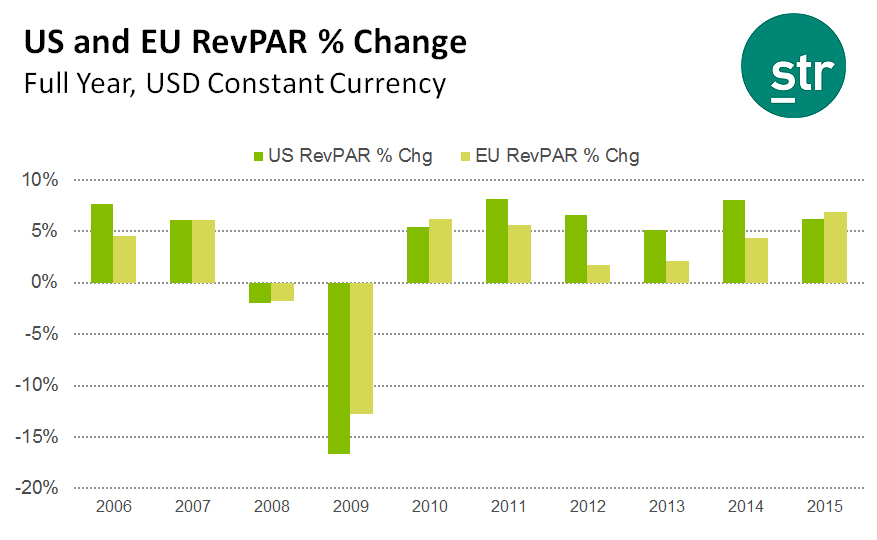