According to Auction.com's Q4 2014 Commercial Real Estate (CRE) Market Monitor, the U.S. commercial market is enjoying a healthy increase in both deal volume and price growth even as risk premiums edge up. CRE deal volume is at a new post-recession peak as cap rates continue to compress. This is a trend likely to continue in the near-term, although some investors may migrate to Europe in search of a better yield.

Expansionary monetary policies in Europe and Japan have weakened foreign currencies relative to the dollar, prompting speculation that more capital will flow outside of the U.S. The European Central Bank also recently announced its commitment to quantitative easing in Europe, in an effort to stimulate the economy. According to Auction.com Chief Economist Peter Muoio, Ph.D., "This should continue to put downward pressure on the euro and have the potential effect of spurring more capital investment into Europe and out of the U.S. as investors look to generate greater return on investment."

Some sectors are faring better than others: apartment trends remain strong, while the office and industrial markets continue to improve, demonstrating near-term growth potential. Meanwhile, retail sector trends are inconsistent, with deal volume growing at a quick clip while price growth resets following a run-up in 2013.

"We're starting to see some significant variations in performance among the various sectors. For example, it looks like we're going to see another banner year in the multifamily segment, as home ownership rates decline and household formation increases," said Auction.com Executive Vice President Rick Sharga. "Office pricing continues to outpace its underlying fundamentals, while retail pricing appears to be cooling off, due to some of the issues that sector is facing."

The total combined volume in the office, retail, apartment, industrial and hotel sectors reached nearly $120 billion in the fourth quarter of 2014, a 5.5 percent increase from a year ago. All five sectors saw a year-over-year volume increase, reflecting stronger valuations and underlying fundamentals. Office and apartment transactions accounted for nearly 60 percent of the total. And, while retail continues to face headwinds due to the rise of e-retail, deal volume increased to a 20 percent share of the total. 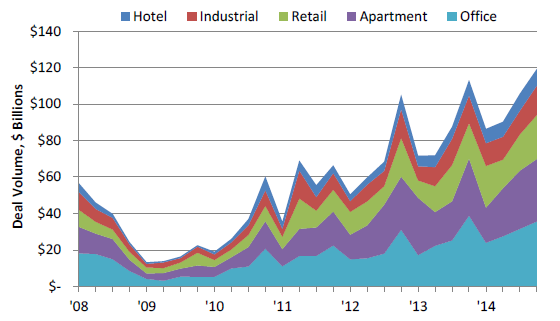 Property pricing remains on a steady upward trend, up 13.9 percent from a year ago. Hotel, retail and industrial sector pricing continues to work back toward prerecession peaks, in contrast to the office and apartment sectors, which have already surpassed those levels.

Office, apartment and industrial sector prices are up 16.6 percent, 14.4 percent and 16 percent, respectively, from a year ago. Meanwhile, the retail and hotel sectors continue to show some weakness. Retail year-over-year price growth is trending well below the other sectors at 6.3 percent, even as its deal volume improves, possibly reflecting a recalibration of retail values following the unexpected sharp jump in investor interest earlier and the recent fall-off and challenges facing the sector. And, while hotel sector data lags one quarter behind and is only available through September, price per key declined on a year-over-year basis for the second consecutive quarter, down 3.4 percent. 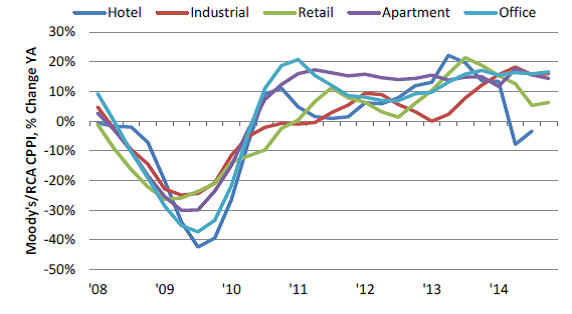 Auction.com's calculation of risk premium takes cap rates and factors out the 10-year U.S. Treasury component, focusing on the expected yield corresponding to the risk of investment in each CRE sector. This means that a higher risk premium signifies a riskier investment, with a higher yield needed to justify that additional risk.

CRE risk premiums have inched up modestly from one year ago, with the apartment sector seeing the most significant increase. This gradual upturn reflects the recent run-up in pricing and valuations across all CRE sectors. 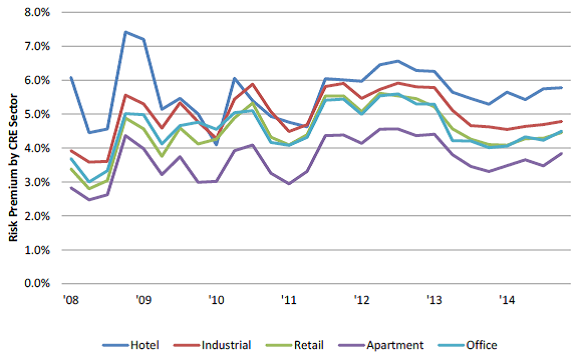 Cap rates are now significantly below their 10-year average across all sectors, and apartment cap rates are just off their new 10-year low of 6 percent set in the previous quarter. The industrial sector posted the largest quarterly and year-over-year cap rate declines, compressing 20 bps from the prior quarter and 50 bps from one year ago.

According to Muoio, this compression of cap rates for CRE is largely due to a four-quarter stretch of declines in the 10-year U.S. Treasury rate, a major component of cap rates. "We expect the Federal Reserve to initiate rate hikes at some point in mid to late 2015 - especially if wage growth comes to fruition - continuing its path of normalizing monetary policy," he said. "This may place upward pressure on cap rates as the risk-free rate begins to rise."