Buckle up, it's going to be the busiest holiday travel season ever recorded in the U.S. this year.

"The holidays are a time for joining with friends and family, and the record number of people traveling this holiday should make for a joyous travel season," said Marshall Doney, AAA President and CEO. "Rising incomes and low gas prices are helping to fill stockings this year, and more people than ever will choose to spend those savings on travel this year."

The increase in holiday travel this year is being driven by continued improvement in the labor market, rising incomes and low prices, including gas prices that remain well below last year's levels. This is helping boost Americans' disposable income, but some consumers continue to remain cautious about their finances as they head into the holiday season.

More than 90 percent of travelers (91.3 million people) will drive to their holiday destinations, an increase of 1.4 percent over last year. Air travel is expected to increase by 0.7 percent, with 5.8 million Americans flying to their holiday destinations. Travel by other modes of transportation, including cruises, trains and buses, will increase 2.4 percent, to 3.4 million travelers.

The national average price for a gallon of gasoline remains poised to fall below the $2 per gallon benchmark by Christmas. Today's national average is $2.01, 53 cents less than last year. AAA expects most U.S. drivers will pay the lowest gas prices on New Year's Day since 2009.

According to AAA's Leisure Travel Index, airfares for the top 40 domestic flight routes are six percent lower this holiday season, falling to an average of $174 roundtrip. Rates for AAA Three Diamond Rated lodgings will be four percent higher this year, with travelers spending an average of $150 per night. The average rate for a AAA Two Diamond Rated hotel has risen 11 percent with an average nightly cost of $119. Daily car rental rates will average $68, three percent higher than last year's holiday travel season. 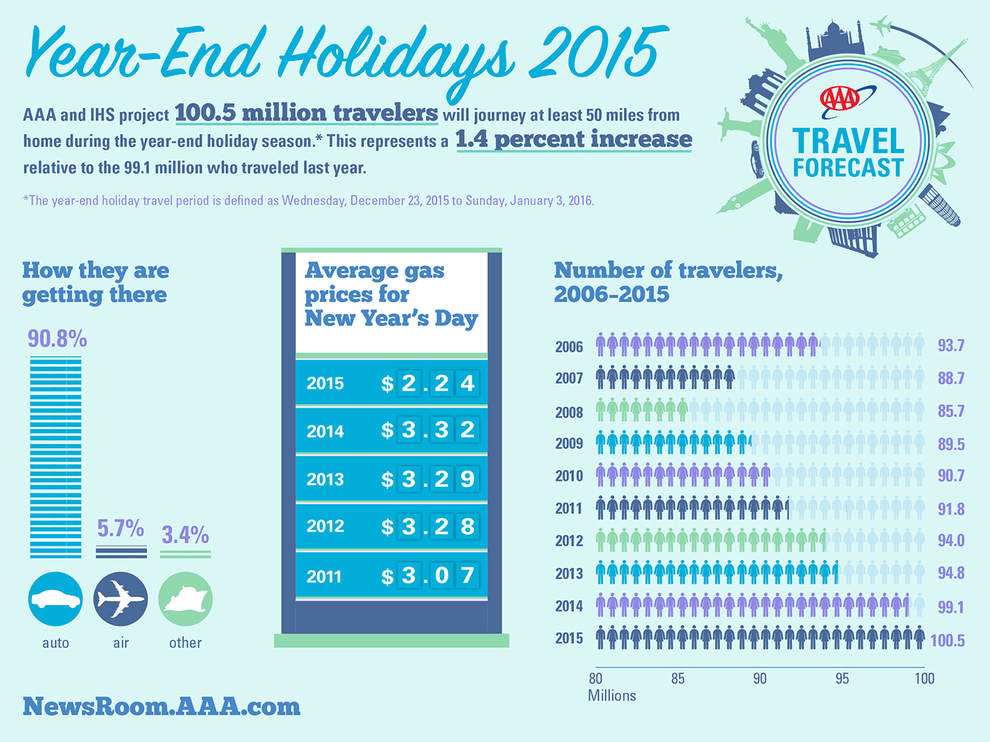