This year's increase in Thanksgiving travel is spurred by improvements in the economy during the second half of the year, including rising wages, increased consumer spending and overall strength in consumer confidence. And despite recent incremental increases in the national average price of gasoline, AAA estimates U.S. drivers have saved more than $28 billion so far at the pumps this year compared to the same period last year.

"One million more Americans than last year will carve out time to visit with friends and family this Thanksgiving," AAA President and CEO Marshall Doney said. "Most will travel on the tried and true holiday road trip, thanks to gas prices that are holding at close to $2 per gallon. Others will fly, take the bus or set off on a cruise to celebrate with their loved ones."

Driving remains most popular mode of travel for Thanksgiving

The vast majority--more than 89 percent--of holiday travelers will drive this Thanksgiving. The 43.5 million Americans planning a Thanksgiving road trip represent an increase of 1.9 percent over last year. Air travel is expected to increase 1.6 percent, with 3.69 million Americans flying to their holiday destinations. Travel by other modes of transportation, including cruises, trains and buses, will increase only slightly this Thanksgiving, to 1.44 million travelers.

According to AAA's Leisure Travel Index, airfares are projected to increase 21 percent this Thanksgiving, landing at an average of $205 for a round-trip flight for the top 40 domestic routes. Rates for AAA Three Diamond Rated lodgings are expected to remain flat, with travelers spending an average of $155 per night. The average rate for a AAA Two Diamond Rated hotel has risen four percent with an average nightly cost of $123. Daily car rental rates will average $52, 13 percent lower than last Thanksgiving.

Many travelers will journey west this Thanksgiving

This year's top destinations for Thanksgiving include many popular west coast cities, as well as perennial family-friendly favorites. The most popular destinations this Thanksgiving, based on AAA.com bookings include: 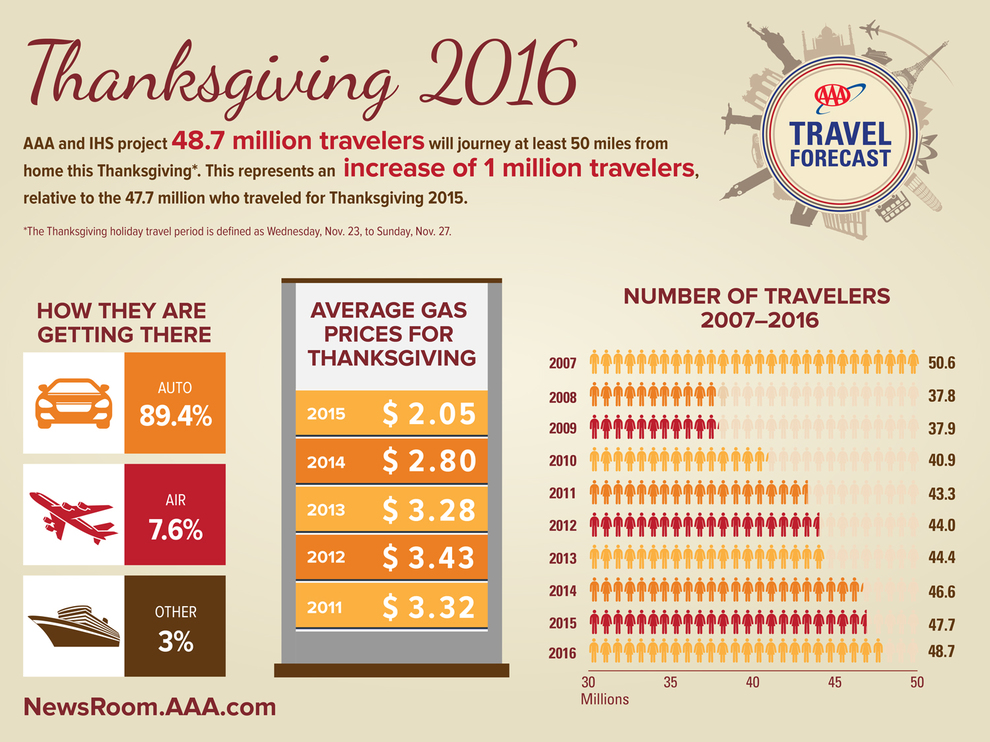