Top real estate executives remain optimistic about the performance potential of the U.S. market, according to the findings of the 2016 Real Confidence survey. Commercial real estate investors, however, will keep in mind the realities of doing business in a moderately expanding economy as they considered the landscape for this year.

Altus Group, in partnership with the National Association of Real Estate Investment Trusts (NAREIT) and the National Council of Real Estate Investment Fiduciaries (NCREIF), polled executives in charge of over $700 billion combined real estate assets under management. They were asked to rate their 2016 outlook on a range of topics by a scale of 0 (no confidence) to 100 (absolute confidence). Additionally, they selected a hypothetical portfolio allocating $1 billion to a variety of commercial real estate sectors and subsectors.

The survey found that real estate executives share many of the worries of global business leaders for 2016, from terrorism to energy prices to the continued global markets' unpredictability, particularly in the case of China. Many investors continue to flock to the United States for broader opportunities and a more stable market, including commercial real estate, despite what one respondent described as the economy's continued "stutter-stop" recovery.

Nonetheless, survey participants continue to believe in the security of the U.S. economy. Investors' sentiment reflects the conventional wisdom that inflation is tame, interest rate increases might have already been figured into forecasts and the nation's gross domestic product is poised to continue growing, however modestly.

That said, investors are less confident in the prospects for the jobs market than most economic forecasters, who expect employment to continue to grow at an accelerated rate in 2016.  Many are skeptical those numbers aren't feasible, considering the potential for the strong U.S. dollar to affect exports and in turn manufacturing employment, and for low oil prices to impact further energy-related jobs.

Job growth is being balanced by an upward pressure on wages, which led respondents to forecast that wage increases will outpace inflation this year. With the country's unemployment rate approaching the full-employment mark and population growing at a pace too slow to absorb all the new jobs being created, the job market is tilting slightly in favor of higher labor costs.

Many executives believe that good investment opportunities in real estate still exist this year. Demand for core investments in primary markets remains strong, supply is still catching up to demand in a few key sectors, and interest is trending upward in secondary markets, as some buyers who are priced out of the core markets seek alternatives. Additionally, tax changes enacted in late 2015 are expected to spur foreign investment in the U.S. market.

The majority surveyed aren't expecting the same double-digit asset appreciation seen last year. However, respondents rated the state of the real estate industry as healthy. Real Confidence levels displayed better-than-average results, indicating that real estate development will increase even with labor and material costs on the rise. Feelings were mixed regarding the possibility of continued increases in the REIT development pipeline.

One area where investors were concerned about overdevelopment is the core and primary markets. These markets remain popular, especially due to the influx of young professionals in the millennial generation, who favor large urban areas.  Respondents were relatively confident the primary markets could be experiencing a pricing bubble, and cited San Francisco and New York--two highly-priced markets still receiving significant inflows of capital--as the most likely real estate markets to experience a price correction during the year.

This possible pricing bubble could be muted by the continued resilience of the U.S. economy and good liquidity. Respondents also foresee investor interest turning towards secondary markets, as traditionally seen at a later stage of an economic recovery. As capitalization rates in primary markets compress to historically low levels and higher interest rates appear likely, many investors are expected to seek better yields in secondary markets, but remain reluctant on tertiary locations.

Capital direction, though, shows limited interest in seeking investments outside the five traditional sectors. Survey respondents had only partial confidence that alternative investments will experience a spike in capital flows in 2016, with the main focus on self-storage and healthcare real estate.

Investors expect decisions in 2016 will hone in on demographic trends and the effect of changes in demand to create opportunities, as core properties become scarce and rich valuations continue to push yields. One respondent said investors will have to deploy a "Moneyball" approach using quantitative measures to judge the future potential of properties based on population flows. While attention seems to focus on the millennials, nearly two-thirds of survey executives polled said they expect capital to concentrate on both millennial and baby boomer trends.

Survey respondents showed relatively strong confidence that rents will continue to increase. They were also confident that occupancies will rise further in 2016, although their level was somewhat muted in that area. The difference is an acknowledgement that rent inflation is due to have an effect on demand in the multifamily sector. With studies warning that many Americans are spending up to half their income in rent, the concern about affordability appears to be justified.

Investors in REIT stocks look forward to a change in the financial market environment, especially the turmoil in stock markets and the long wait for action on interest rates by the Federal Reserve. They showed an implicit confidence that REIT share prices will recover, at least back to par with their net asset value.

Investors had a mixed outlook on what Fed action would do to REIT prices, with over half expecting higher rates would cause further price declines. The investors were more optimistic about prices keeping up with net asset value after a rate hike, with nearly two-thirds of respondents expecting a recovery, but almost one-third fearing that stock prices will remain at a discount.

Executive selections when allocating $1 billion within a variety of real estate choices reflect an air of economic concern.  The less volatile private equity choice received 49.3 percent of the $47 billion total capital.  Public equity real estate, or REITs, hauled in 31.2 percent, followed by a risk-averse choice in private debt at 13.3 percent.  Public debt, CMBS or RMBS options, only amounted to 6.2 percent of the total allocation.  Individual portfolio strategies spanned a range of allocations, but interest in private equity office, and apartment REITs displayed some of the highest investment interest for 2016 based on the Real Confidence Index.

A market with strong fundamentals, an economy with slow and steady growth and a steady pipeline of capital and development are giving investors hope, even as the economy settles into a lumbering recovery pace. In this "new normal", commercial real estate will continue to justify its place in investment portfolios, as the global financial crisis continues to recede into memory.

Faced with an environment of slow but steady recovery, commercial real estate investors appear to be more optimistic on the fundamentals of the economy than the broader markets would suggest. Even as interest rates increase, rates remain low and opportunities will still exist for lower cost financing in the commercial real estate arena.

Additional key insights from the survey: 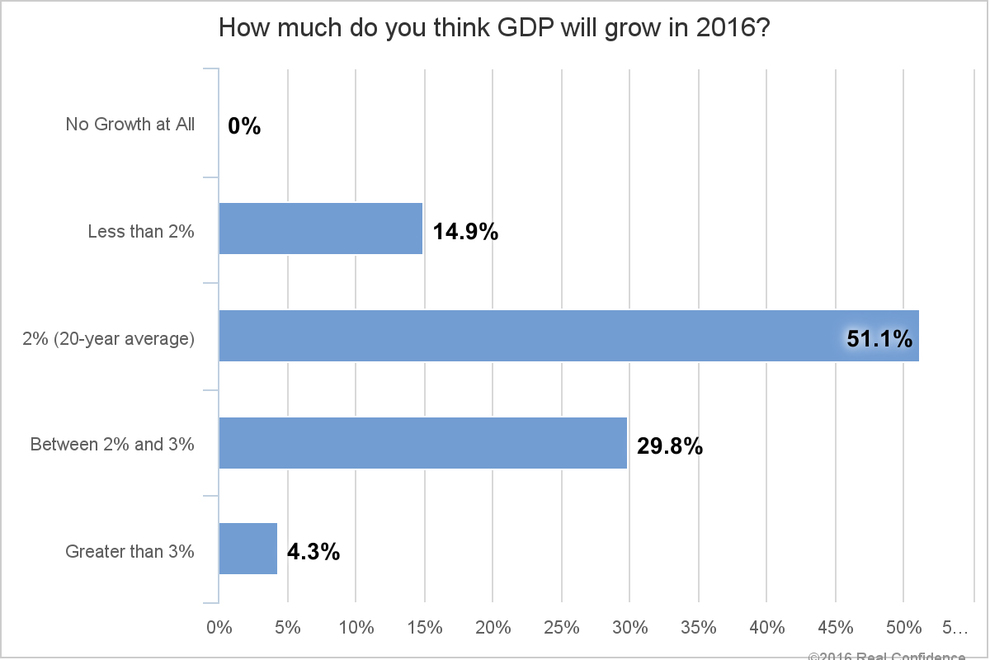 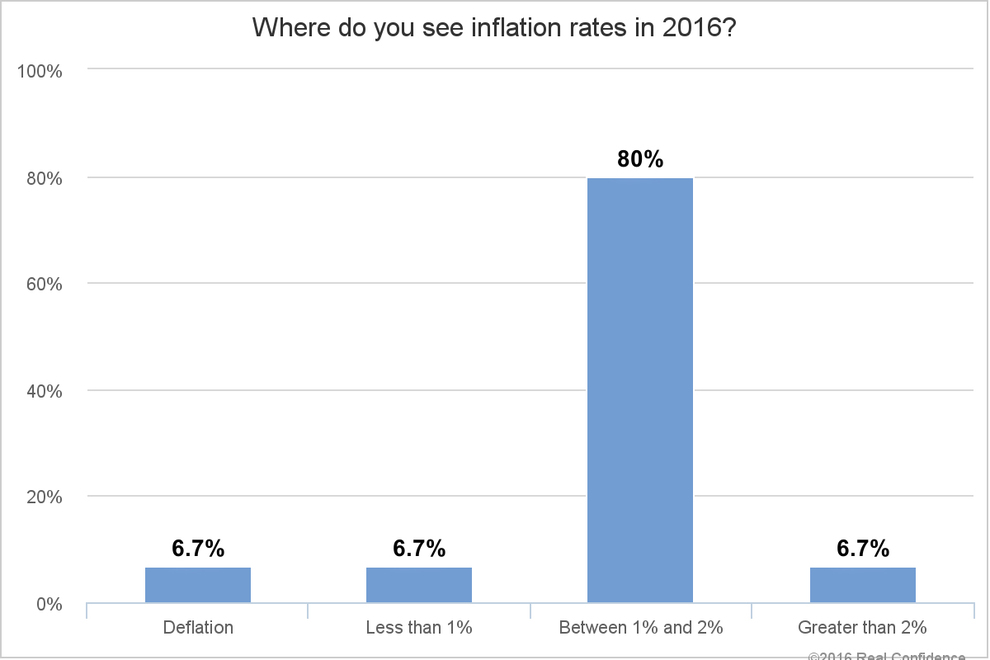