Majority of Largest U.S. Office Leases of 2019 Were Signed by Tech Firms


Global commercial real estate advisory firm CBRE is reporting this week that U.S. technology companies claimed the biggest share of the 100 largest office leases signed in the U.S. last year, and Manhattan ranked ahead of all other cities as the home of many of those huge leases.

CBRE's analysis of the 100 largest office leases signed last year found that the tech industry's presence grew as the leases got bigger. Specifically, tech companies accounted for more than 32.4 percent, by square footage, of the 100 largest leases, well ahead of tech's 22 percent share of overall office leasing last year. Other industries claiming large shares of the top 100 are financial services and insurance (13.5 percent) and government and nonprofits (11.2 percent).

"The tech industry's outsized share of the largest U.S. office leases underscores the preference of big tech companies for corporate campuses and multiple-floor assignments in office buildings," said Ian Anderson, CBRE's Americas Head of Office Research. "We expect this to continue in 2020, since tech companies represent nearly 40 percent of the 100 largest office-lease requirements currently in the market looking for space."

Other industries that, like tech, have a greater share of the top 100 leases by square footage than of overall office leasing are energy (7.2 percent of the top 100), government and nonprofits (11.2 percent) and manufacturing and transportation (7.7 percent). Overall, the largest 100 office leases span more than 32 million sq. ft.

On a market basis, Manhattan led all with 23 huge leases totaling 11 million sq. ft. Manhattan's stable of large office leases from 2019 was divided among eight industries, whereas some markets owe their large leases to a single industry, such as tech in Seattle and energy in Houston. 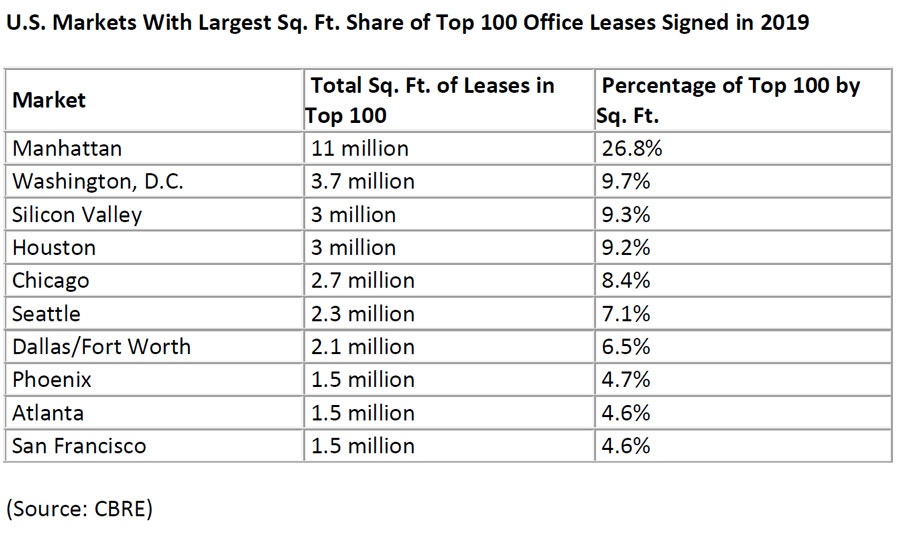