Based on a new survey by CBRE of 176 U.S. companies shows that a wide gap between manager and employee sentiment persists when it comes to regular attendance in the office--leaving open the question of whether employees will actually return at a regular cadence that endures over time.

The survey, conducted for CBRE in August by CoreNet Global, gauged the sentiments of senior leaders at 176 companies in the U.S. and Canada on topics such as the progress of their return to the office, the amenities they have added or improved, and their plans for expanding or contracting their office portfolios.

In the first eight months of this year, many companies sought to ease employees back to their offices rather than mandate attendance. This month several high profile companies have attracted headlines by enacting firmer attendance guidelines, and anecdotal accounts this week describe busier commutes in some markets.

Still, CBRE's survey found just last month that 58 percent of companies reported employees were working in the office less often than executives expected. That's in comparison to 39 percent that said attendance was ideal and 3 percent that said it was more than anticipated. 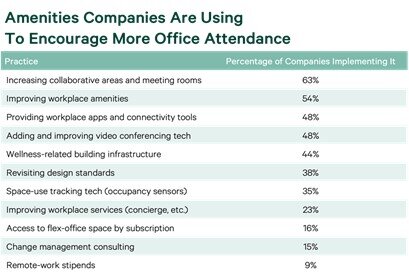 Most companies aren't enacting strict attendance mandates. That puts more importance on the methods and tools managers are using to encourage employees to come into the office - but the most popular so far are fairly passive. Most companies in the survey (62 percent) are simply sending memos to employees about policies and expectations for office attendance. Fewer (41 percent) are explaining to employees why a return to the office matters for their company. Fewer still (29 percent) are surveying employees about their needs and preferences. Among the least popular methods (18 percent) is training for managers to guide and evaluate employees' behaviors around office attendance.

"To change organizational behavior, companies need to focus on creating new practices and implementing new tools to help drive a new normal," said Julie Whelan, CBRE Global Head of Occupier Research. "This is less about iterating on what was. It's about working to change behaviors based on a new set of norms and principles."

To that end, some companies (36 percent) are highlighting best practices and encouraging transparency about office attendance. The former can entail counseling managers to lead by example and advising teams to set certain days of the week to meet in the office. The latter can entail providing workplace apps that allow employees to see who will be in the office on which days so they can coordinate in-person meetings.

"Attendance mandates have their place in addition to the many tools available to encourage employees to visit the office more frequently: in-office tech, better office design, amenities and events that promote collaboration and use of the office," said Manish Kashyap, CBRE Global President of Advisory & Transaction Services.

The survey also gauged companies' sentiment on expansion or contraction of their office portfolios. It found that, while the largest portion of companies anticipate their portfolios contracting over the next three years, a growing number foresee theirs expanding.