According to CBRE's newly released Manhattan Retail MarketView for fourth quarter 2015, the evolution of Downtown Manhattan -- once recognized mainly for its financial office tenants, it now has emerged as a home for TAMI-sector tenants, helping drive increased demand for retail, food and entertainment.

The need for retail space in Lower Manhattan continues to grow, as a rising number of retailers seek a presence in the area. Notably, the average asking rent in Downtown's Broadway corridor saw a 55.0% surge from Q3 2015, jumping from $290 to $449 per sq. ft.--the largest quarter-over-quarter increase of any of the 16 corridors tracked by CBRE--with the priciest availabilities asking as much as $600 per sq. ft.

Over the past 15 years, the public and private sector have invested a total of $30 billion in Downtown's redevelopment. In addition, new transit infrastructure valued at $6.4 billion now offers increased accessibility to Brooklyn, New Jersey and neighborhoods within Manhattan.

Analyzing Manhattan retail as a whole, average asking rents in seven of the 11 corridors long tracked by CBRE achieved all-time highs in 2015, surpassing even their pre-recession peak in 2007 (responding to increased activity in areas such as the Meatpacking District, last year CBRE expanded the number of corridors it tracks from 11 to 16). After Downtown's Broadway corridor, the largest quarter-over-quarter increases were in two areas of Meatpacking, which saw growth ranging from 11.0% to 12.8%.

Midtown's Fifth Avenue corridor from 49th to 59th streets experienced the next-highest increase--5.6% quarter-over-quarter, with the average asking rent rising from $3,623 to $3,826 per sq. ft. This boost can in part be attributed to landlords' increasing confidence, driven by Bulgari's renewal at 730 Fifth Avenue--which broke the New York City record, with rents in excess of $5,000 per sq. ft. 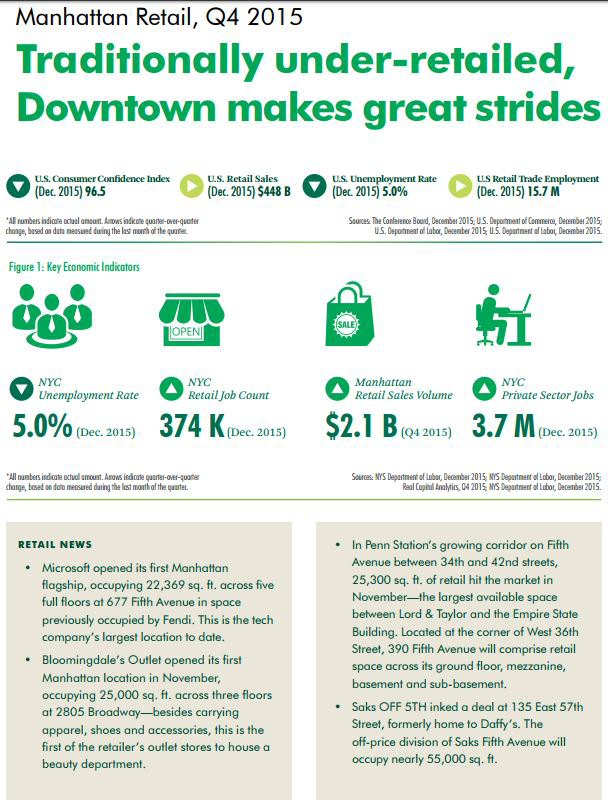