According to Transwestern Commercial Services' Second-Quarter 2019 New Jersey Industrial Market Report, the overall vacancy rate across the state has improved to an historical low of 3.6%, marking the fifth consecutive quarter of vacancy rates less than 4%.

The demand for industrial space in New Jersey is causing rents to continually rise, with the overall average higher by 7.8% year over year, including 10 submarkets recording rent increases of more than 10%.

The second quarter of 2019 saw more than 20 leases in excess of 100,000 square feet inked in New Jersey's industrial market, with four of the top six leases signed in the New Jersey Turnpike Exit 8A submarket, which also accounted for more than 30% of the overall positive absorption for the quarter.

The largest transactions continue to be from e-commerce retailers situated along the Turnpike corridor. However, activity is beginning to expand to submarkets farther west, most notably in the Route 46/23/3, Fairfield and Morris East submarkets, with leasing in non-Turnpike submarkets representing 27% of total year-over-year net absorption.

"As the best product in the primary corridors becomes scarcer, corporate tenants expanding their geographic parameters to find more options," said Lori Zuck, Managing Director at Transwestern. "However, these secondary submarkets have also tightened, pushing rental rates as much as 25% to 35% higher in the past few years."

Manufacturing continues to be a driving force in the industrial market, with tenants in that industry accumulating nearly 4 million square feet of positive absorption during the past five years, causing vacancy to decrease from 6% to 3.4%. Leasing west of the Turnpike has been dominated by the manufacturing industry, with food and chemical producer Corbion signing a new 391,515-square-foot lease in the Route 46/23/3 submarket with plans to move in this fall; nutritional and functional foods manufacturer Vitaquest International signing a 200,000-square-foot lease in the Morris East submarket; and food and beverage manufacturer Karat by Lollicup announcing plans to relocate their New Jersey operations to a 190,000-square-foot facility in the Somerset submarket.

"As consumer spending continues to grow and products pour across the shore, the Port of New York and New Jersey continues to set annual records, rising to No. 2 in overall volume in the country," said Matthew Dolly, New Jersey Research Director at TCS. "As industrial growth throughout the state shows no signs of abating and new construction is at its lowest level in three years, the need for high-quality product in the market is driving infill development." 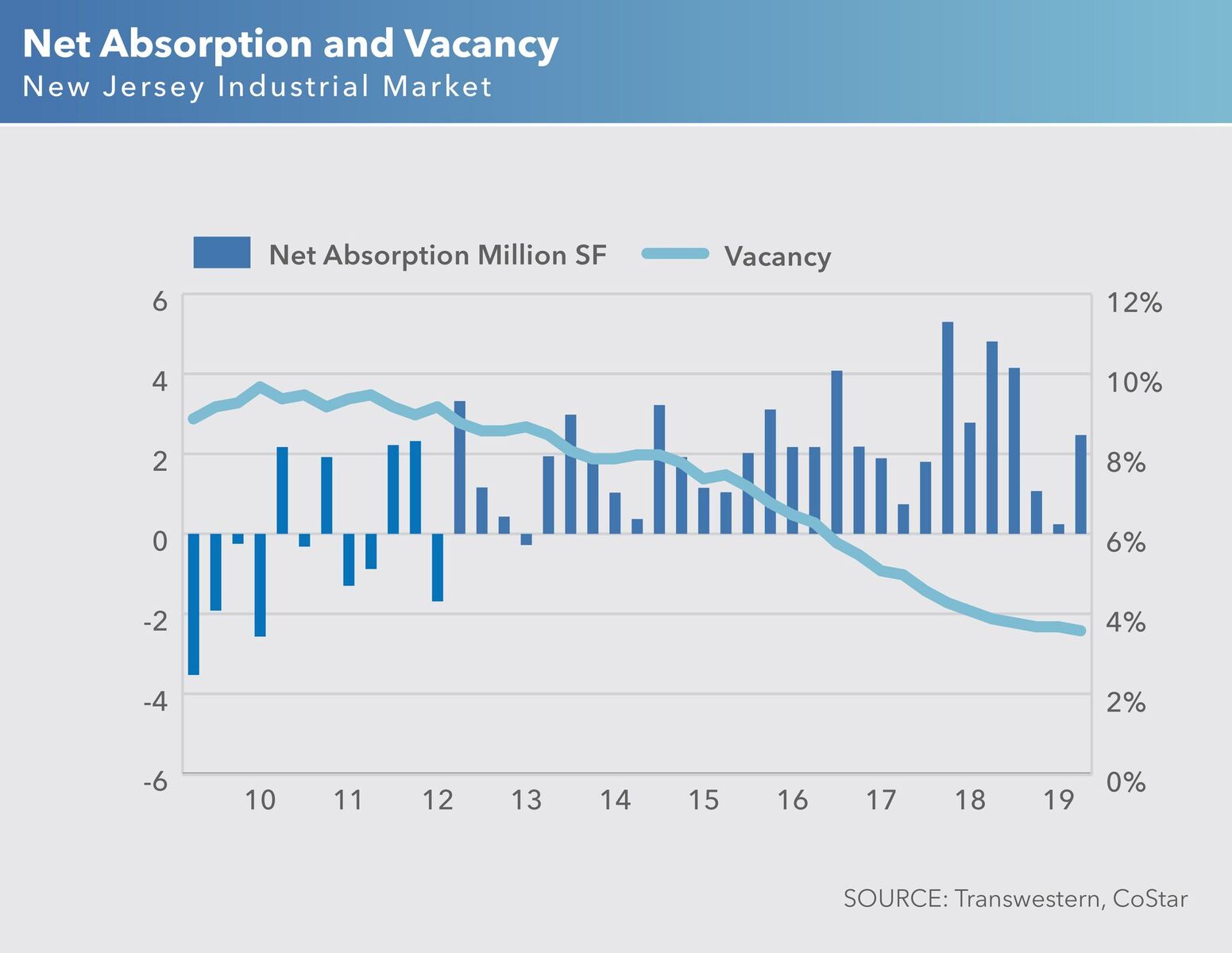