According to a new study by STR's consulting & analytics division, U.S. hotel tracts dependent on the oil and gas industry continue to see weakened demand as a result of low oil prices. In addition, hotel supply in these regions continues to grow at a strong pace.

"Over the past five years, oil and gas regions have accounted for 20% of the new hotel rooms developed in the U.S.," said Steve Hennis, STR's VP of consulting & analytics. "Driven by the country's effort to become less dependent on foreign oil, the energy sector had a rosy long-term outlook between 2009 and late 2014, and consequently, developers flocked to many of these areas to build in these small, room-starved regions. However, now there is a glut in the world's oil supply, and that is having a noticeable impact in the U.S where oil is more costly to produce."

Of STR's 630 U.S. hotel tracts, 39 submarkets (see list below) are identified as being primarily driven by the oil and gas industry. Of those 39 submarkets, 20 account for the vast majority of hotel rooms and accommodated demand. Those 20 submarkets reported a 4.4% drop in demand in 2015, while supply rose 4.1%. Through Q1 2016, the 20 submarkets experienced an 8.8% decline in demand and a 3.7% rise in supply.

With supply and demand trends creating a negative dynamic, revenue per available room in the major oil and gas markets began to decline in early 2015 and then worsened by midyear. RevPAR for these submarkets is down 14.2% over the trailing 12-month period and down 18.4% through the first quarter of 2016. Those RevPAR losses have essentially erased most of the robust gains made during the economic recovery.

"The foreseeable future for the hotels in these markets is bleak barring a miraculous turnaround for the energy sector, which is largely dependent on global factors beyond the control of the U.S.," Hennis said. "That being said, oil prices change course quickly at times. Just as prices plunged quickly over the course of just a few months, they can skyrocket just as unexpectedly. However, hope is not a very comforting strategy for hotel investors in these tertiary markets where the ability to induce other forms of room night demand is negligible."

Since the end of 2010, an average of 7,500 new rooms have opened in the major oil and gas submarkets each year. Through Q1 2016, 1,376 rooms entered the market, while another 6,639 rooms are In Construction and slated to open by the end of the year. Additionally, 2,466 rooms are currently In Construction for scheduled openings in 2017, and more than 7,000 rooms are in the Final Planning stage.

The 39 Major U.S. Oil and Gas Submarkets Include: 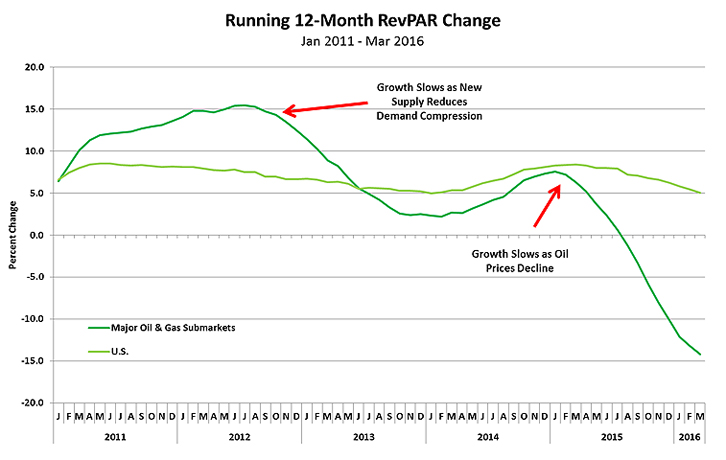