There is a reason for this week's extremely busy airports, passenger trains and roadways in the U.S. - record-setting holiday travel.

Highlights from 2014 to 2015 Year-End Holiday Travel Forecast by AAA:


"'Tis the season for holiday travel, and this year more Americans will join with friends and family to celebrate the holidays and ring in the New Year than ever before," said Marshall L. Doney, AAA President and Chief Operating Officer. "While the economy continues to improve at an uneven pace, it seems more Americans are looking forward with increasing consumer confidence, rather than looking back at the recession. This is helping to drive expected travel volumes to the highest level we have seen for the year-end holidays."

"Lower gas prices are filling stockings with a little more cash to spend on travel this year as travelers are expected to pay the lowest prices since 2009," continued Doney. "Lower prices are increasing disposable income and enabling families to set aside money for travel this year."

The calendar is having a positive effect on the number of travelers expected this year. This year the holidays land on a Thursday, creating a holiday travel season that is one day longer than last year's and the longest since 2008, offering travelers more options for departures and return trips. This flexibility makes it possible for more people to fit holiday travel into their schedules.

With more than 90 percent of holiday travelers driving to their destinations, AAA urges everyone on the road to be extra diligent about the dangers of impaired driving. According to the latest data from the AAA Foundation for Traffic Safety's annual Traffic Safety Culture Index, one in eight of all licensed drivers who drink at least occasionally reported having driven when they thought their alcohol level might have been close to, or possibly over, the legal limit in the past year.

The survey also reveals 91 percent of drivers consider impaired driving to be unacceptable, with 42 percent reporting that drunk drivers are a bigger problem today versus three years ago.  "Despite the ubiquitous warnings about drinking and driving, especially during the holiday season, an average of one alcohol-impaired driving death occurs every 45 minutes," said Doney. 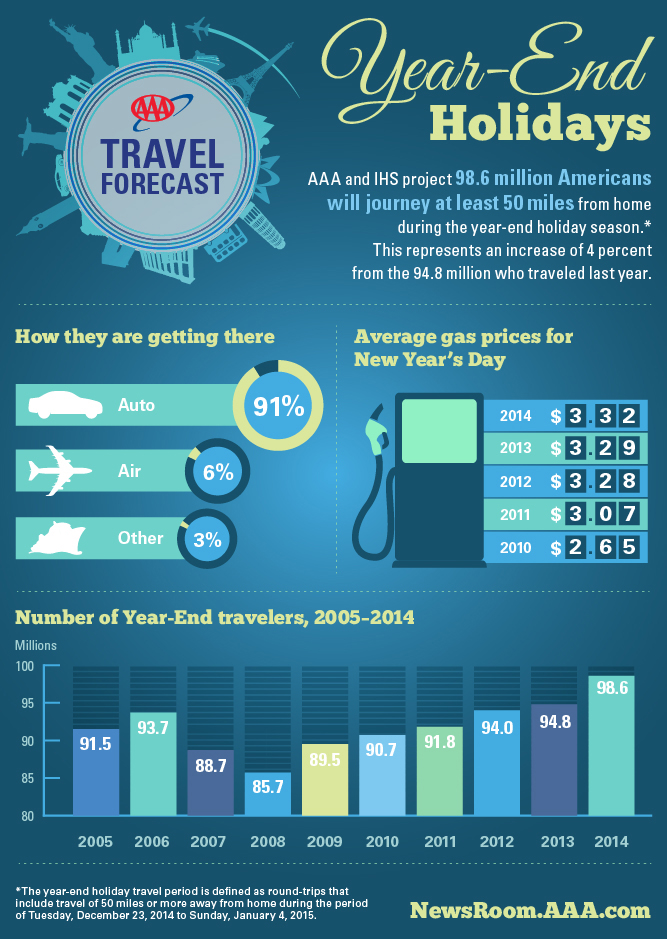