According to CBRE's newly released Scoring Tech Talent Report, strong demand for key tech skills such as software development, hardware engineering and information security, coupled with a tight labor supply, is driving companies to locate in markets with the largest concentrations of high-quality talent like Northern California and Manhattan. And while value is a key driver when it comes to choosing an office location, companies are showing that they are willing to pay a premium to access the highest quality tech talent.

Overall cost variances from market to market are striking: Taking both talent and real estate costs into consideration, the "typical" U.S.-based, 500-person tech company needing 75,000 sq. ft. of office space can expect its total annual cost to range from $24 million in Vancouver, the least expensive of the 50 markets included in the CBRE report, to $57 million in the San Francisco Bay Area, the most expensive market.

According to CBRE's analysis, which can be viewed in detail through the interactive Tech Talent Analyzer, the best-value markets with the highest quality of talent are Toronto and Vancouver (due in part to the strong U.S. dollar) followed by Indianapolis, Pittsburgh and Detroit.

"Since the cost of talent is the largest expense for most firms, the quality of that tech talent is becoming one of their most important considerations. The skills of the available labor pool do not appear to align with available jobs, causing a structural impediment to growth for companies across North America," said Colin Yasukochi, director of research and analysis for CBRE in the San Francisco Bay Area.

"Only 37 percent of all tech-talent workers are employed in the high-tech industry, meaning tech companies must compete with other industries that employ the remaining 63 percent of tech workers. In addition, the unemployment rate for college-educated workers is around 2.3 percent in the U.S., further stiffening competition. All of this means that, more than ever before, top tech talent comes at a cost today," he added.

Atlanta and Toronto are the big stories on this year's Tech Talent Scorecard. Atlanta entered the top five for the first time along with traditional stalwarts like San Francisco Bay Area, Seattle, New York and Washington, D.C. Atlanta bumped Austin out of the top five, which fell back to number 8. Atlanta is one of the few large markets that maintained its fast pace of tech talent growth and has an accelerated forecast for future tech job creation, which elevated its position in the rankings.

Meanwhile, Toronto jumped a full six spots to number 6, from last year's number 12. The elevated ranking was due to its talent employment base growing by the highest number of workers.

The rankings for the Tech Talent Scorecard are determined based on 13 unique metrics including tech talent supply, growth, concentration, cost, completed tech degrees, industry outlook for job growth, and market outlook for both office and apartment rent cost growth.

The top 10 cities on the Tech Talent Scorecard were all large markets, each with a tech labor pool of more than 50,000: 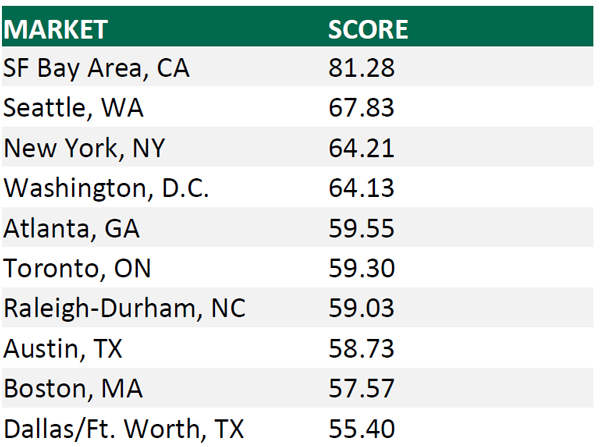 Rounding out the top 15 were Baltimore, Denver, Newark, N.J., Orange County, Calif. and Chicago. Denver and Newark were new this year in the top 15, bumping Phoenix and Minneapolis to number 17 and 18, respectively. Of note, Vancouver also made a strong showing this year at number 16.

Tech job growth gained momentum in 28 of the 50 markets. This means job creation grew faster in the past two years (2015-2016) compared with the prior two-year period (2013-2014). The number of markets experiencing faster growth almost tripled from 10 markets in last year's Scoring Tech Talent report. The top 10 momentum markets and their associated tech talent growth rates were: 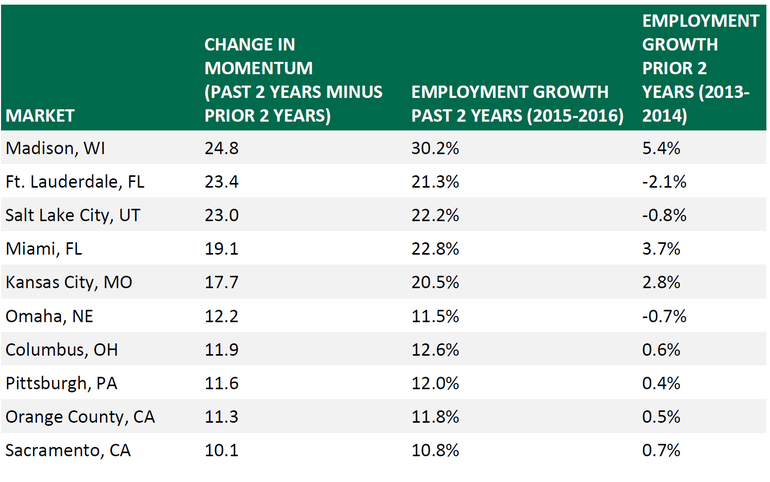 "This year's report shows the top 10 markets for momentum are all moderately priced and grew at least 10 percent faster than during the prior two-year period. Tech employment growth has a multiplier effect that positively impacts economic growth, which in turn can have an immense impact on commercial real estate activity," said Mr. Yasukochi.

The high-tech industry's share of major leasing activity nationwide increased to 19 percent in 2017 from 11 percent in 2011--the largest single share of any industry. Accordingly, office rents are up in almost every market in the top 50 and vacancy has declined, with the biggest impact in the most tech-concentrated sub-markets.

Significant demand for office space in top tech-job-producing markets raised rents to their highest levels and pushed down vacancy rates to their lowest levels. Rent growth is most prominent in the large tech markets, with office rents in the San Francisco Bay Area two-thirds higher than five years ago. But the decrease in vacancy rates is present across both large and small tech markets. Vacancy rates in the San Francisco Bay Area and New York are the lowest of the top 50 tech talent markets, and some small markets like Madison and Nashville are not far behind.

The 10 markets with the most significant five-year rental rate growth include: 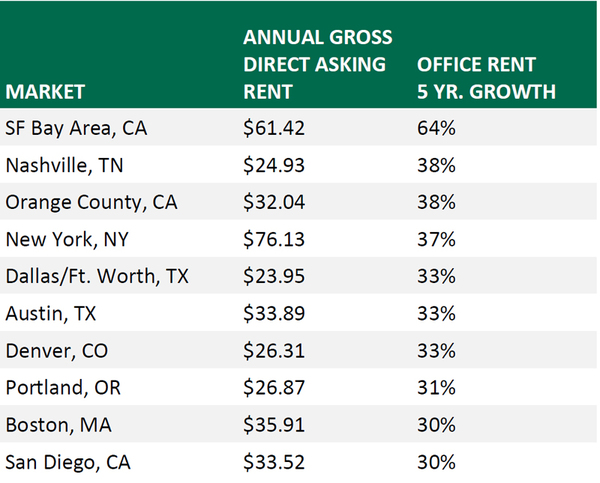 College graduates do not always remain in the labor market where they earn their degrees; they often migrate to locations that offer the best job opportunities and pay. Analyzing tech-related graduation data and tech-related employment growth, CBRE calculated the difference between where tech talent workers are employed and where they were educated. Tech degrees cover the most recent five-year period available (2011-2015) and tech jobs added cover the time period when most graduates would be counted in employment figures (2012-2016).

Not surprisingly, the San Francisco Bay Area stands out as a strong tech-job creator and tech talent attractor, with nearly 80,500 more tech jobs than graduates, followed by eight markets that added 10,000+ more jobs than graduates. On the other end of the spectrum, Los Angeles, Washington, D.C., and Boston produce a significant number of tech graduates, but post a deep deficit when it comes to employing them locally. 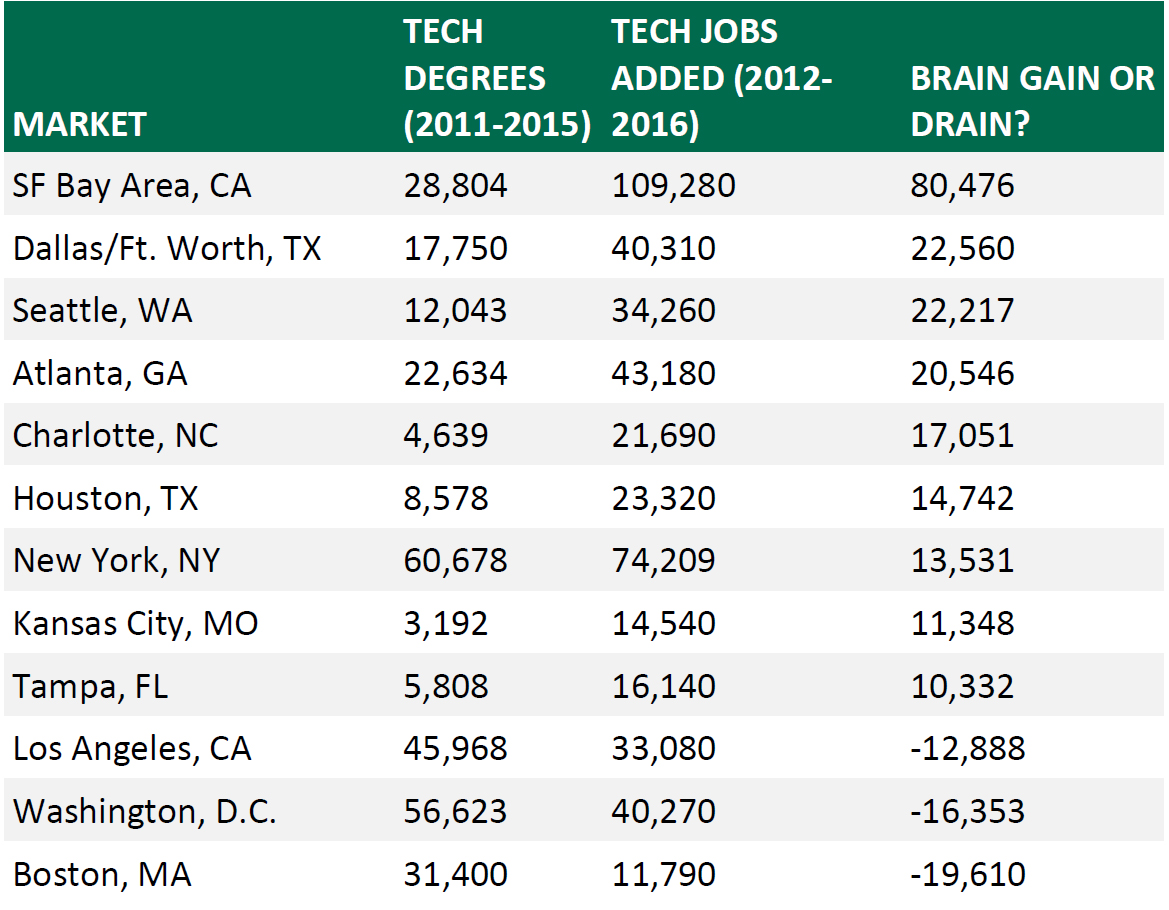