According to a new annual survey by the National Association of Realtors, vacation home sales in the U.S. cooled off in 2015 but remained at the second highest amount in nearly a decade, while investment purchases increased for the first time in five years.

Mirroring the strong price growth seen throughout the U.S., the median sales price of both vacation and investment homes surged in 2015.

NAR's 2016 Investment and Vacation Home Buyers Survey, covering existing- and new-home transactions in 2015, found that vacation-home sales last year declined to an estimated 920,000, down 18.5 percent from their most recent peak level of 1.13 million in 2014.

Investment-home sales in 2015 jumped 7.0 percent to an estimated 1.09 million from 1.02 million in 2014. Owner-occupied purchases jumped 15.9 percent to 3.74 million last year from 3.23 million in 2014 - the highest level since 2007 (3.93 million). Sales estimates are based on a national online survey including responses from over 2,000 U.S. adults who purchased a residential property in 2015, and exclude institutional investment activity.

Lawrence Yun, NAR chief economist, says vacation sales took a sizeable step back in 2015, but still came in at the second highest amount since 2006 (1.07 million). "Baby boomers at or near retirement continue to propel the demand for second homes, although headwinds softened the overall volume of vacation sales last year," he said. "The expanding pool of buyers amidst a dwindling number of bargain-priced properties led to tighter supply and fewer sales and caused the price of vacation homes to rise. Furthermore, the turbulence that hit the financial markets the second half of the year likely seized some would-be buyers' available cash."

According to Yun, many of the metro areas with the strongest price appreciation in 2015 were in the South - the most popular destination for vacation buyers - and particularly in several Florida markets. While increased buyer demand contributed to the run-up in prices, it also likely squeezed less affluent households looking to purchase vacation properties.

Vacation-home sales accounted for 16 percent of all transactions in 2015 - down from 2014 (21 percent), but still the second highest share since the survey was first conducted in 2003. The portion of investment sales remained unchanged from a year ago at 19 percent, and owner-occupied purchases increased to 65 percent (60 percent in 2014).

"Despite a smaller share of distressed properties coming onto the market, investment purchases reversed course in 2015 after declining for four straight years," says Yun. "Steadily increasing home prices and strong rental demand appear to be giving more individual investors assurance that purchasing real estate will diversify their portfolios and generate additional income if they decide to rent out the home."

The share of vacation buyers who paid in cash jumped to 38 percent from 30 percent in 2014, while cash purchases by investors decreased to 39 percent from 41 percent a year ago. Of buyers who financed their purchase with a mortgage, over half (52 percent) of vacation buyers and 44 percent of investors financed less than 70 percent of the purchase price.

Over one-third of vacation buyers plan to use their property for vacations or as a family retreat (37 percent), 16 percent bought for future retirement plans and only 7 percent purchased to generate income through renting the property, a decrease from 11 percent in 2014.

Investment buyers last year purchased property for a variety of reasons, with an increasing share from 2014 citing rental income as the primary reason (42 percent; 37 percent in 2014), followed by low prices and the buyer found a good deal (16 percent), and for potential price appreciation (14 percent).

Likely reflecting growing demand towards renting in the city, investment purchases in urban areas increased to 29 percent (26 percent in 2014). Purchased properties from investment buyers were more likely to be in the South (37 percent) and in a suburban area (41 percent).

Perhaps encouraged by rising housing demand and home prices, over 80 percent of both vacation buyers and investment buyers believe that now is a good time to purchase real estate. 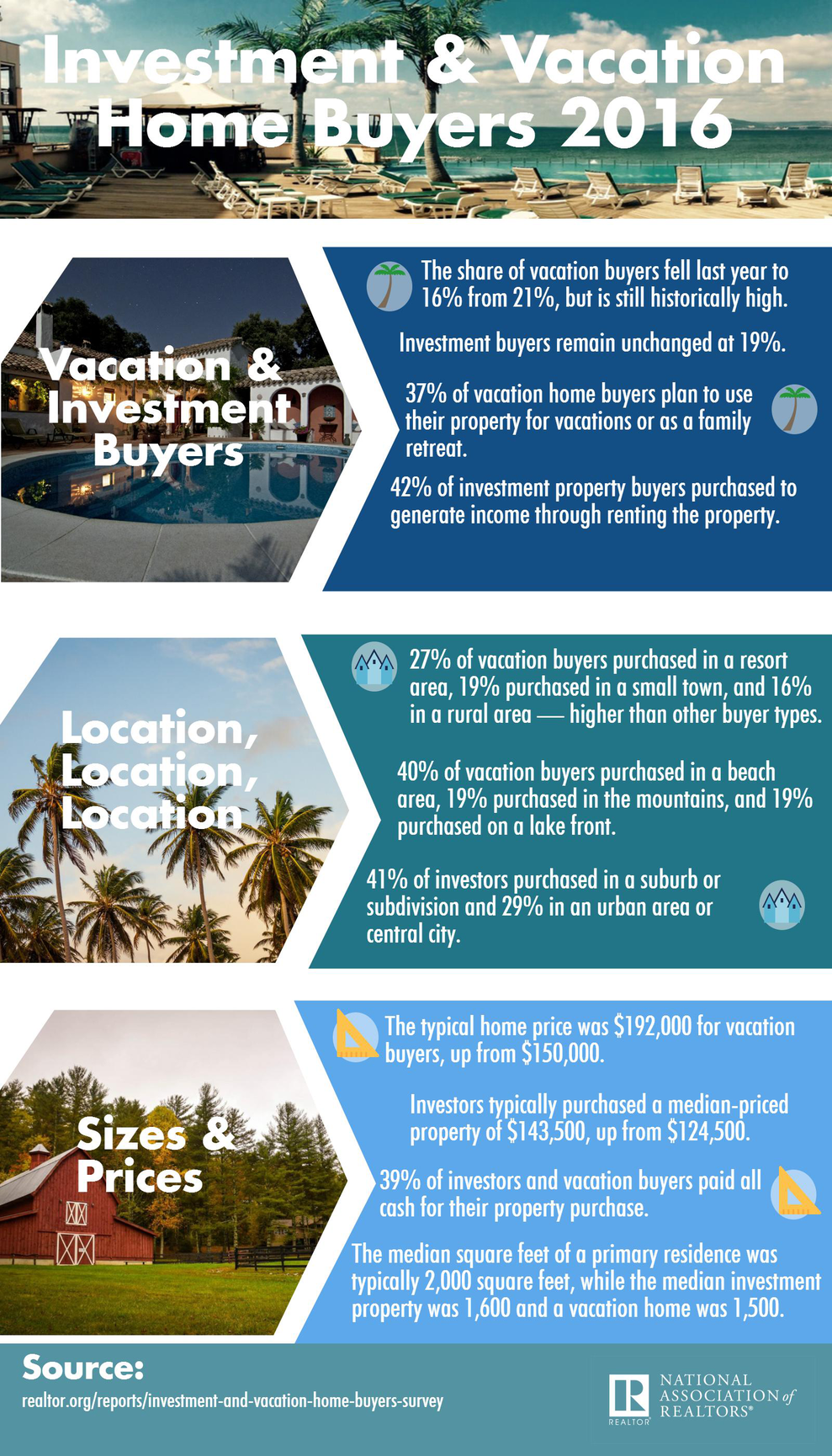