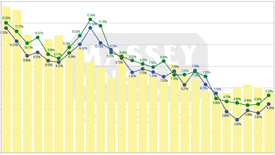 
(NEW YORK, NY) -- Now that the Manhattan multifamily market is in a slump, investors and other market participants have been asking me to compare current conditions to various points in previous cycles in the past 25 years. They want to know what the market looked like in the 1980s, when we were booming, and in the early 1990s when we almost went bust. What were the peak-to-trough comparisons then? How long did the recovery take? They have the same questions about what happened before and after the recession of the early 2000s. Above all, they want to know how low the market is going to dip this time, from its high point in 2007. 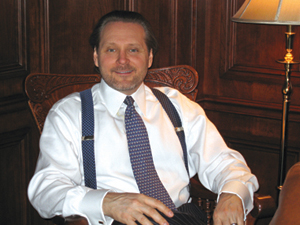 Looking at the market from 1984 (the year I started selling buildings) to the present, we notice cyclical patterns that indicate that to some extent, history repeats itself. However, it has never been easy to anticipate the peaks and the valleys.

The most effective way to analyze Manhattan's multifamily market over the past generation or so is to compare capitalization rates and gross rent multipliers (GRMs) during that period.

The "cap rate" is the ratio of a property's net operating income, and either its original price or current market value. In other words, if you paid $1 million for a building that nets $60,000 in a year, the building's cap rate is 6%. This is a way of determining how soon a property will pay for itself. By dividing a property's cash flow by its cap rate, you can estimate the property's market value. The GRM is simply the ratio of a property's price to its annual rental income before expenses. The multiplier is the number of years it would take a property to pay for itself in gross received rent. 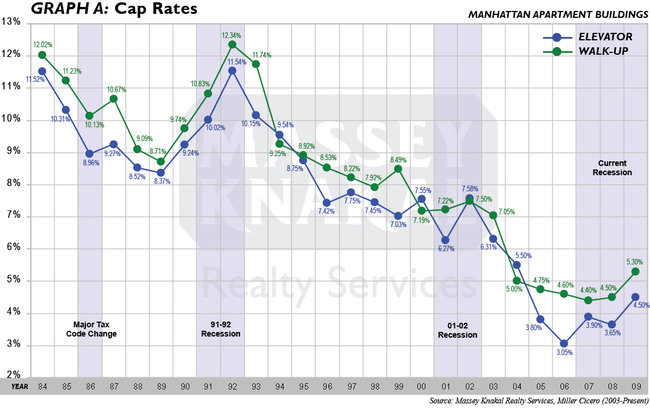 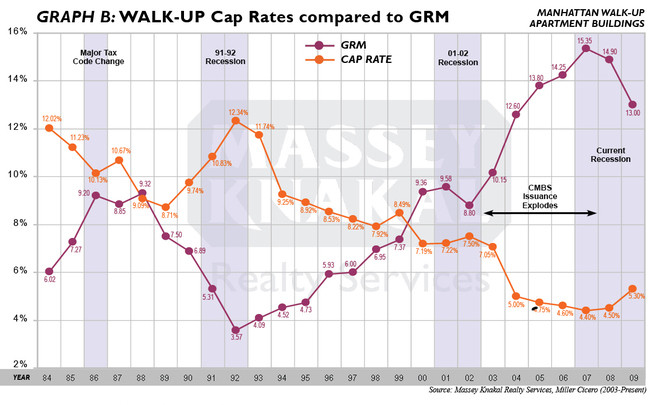 While GRM analysis is useful--particularly in a regulated environment such as we have in New York City--cap rates are stronger indicators of the relationship between a property's risk and its cash flow growth potential. The price of a higher-risk property should be justified by a higher cap rate, while a property with a low cap rate should show greater upside potential in its cash flow. 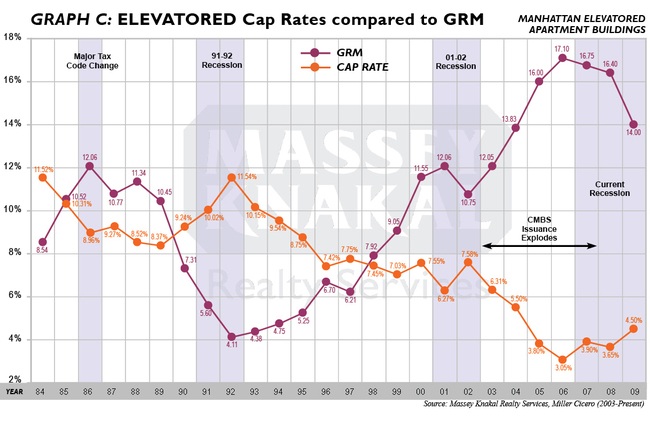 This might make you think that investors used to make a lot more money on apartments--but keep in mind that in 1984 and 1985, commercial mortgage rates were higher than 13%. The 10-year Treasury rate, which is considered the risk-free rate, was over 11.5%. So when you consider the debt service, those double-digit cap rates of the mid-1980s were actually aggressively low. Multifamily properties were selling at rates of return below the risk-free rate, and below the rates on commercial mortgages.

Investors were willing to accept low returns on multifamily properties for several reasons:


Thus, the true value of a property reflected not only the value of existing cash flow, but also tax benefits, the value of access to high levels of debt, and a conversion premium. But the good times were subject to an intermission in 1986, when the tax advantages were substantially removed. The higher taxes created cash flow problems, which is why you see an increase in cap rates and reduction in GRMs in 1987.

In October of 1987 the stock market crashed, but the bull market in real estate didn't end for another couple of years. Note that in 1988 and 1989, cap rates for elevator buildings were still lower than the 10-year T-bill. In 1989, cap rates for walkups were below the risk-free rate as well (See Graph G).

To sum up, the period from 1984 through 1989 was characterized by high prices, negative leverage, and yields below what could have been obtained on a completely risk-free basis. Tax benefits and co-op conversion potential were the main stimulus during this period.

However, in the early 1990s, the real estate debt markets evaporated as the Savings and Loan crisis started to take hold. Leverage wasn't nearly so available; in fact many investors had to under-leverage. Too much access to debt had led to overbuilding in the 1980s, but in the early 1990s new construction virtually ceased. You can see from Graphs B and C that starting in 1990, cap rates began a steady climb and GRMs began a steady decline. The volume of sales also started a rapid decline in the early 1990s (See Graph F). An interesting note: if we look at the three points of intersection on Graph C, we see that the intersection is at a lower point successively. We believe this is indicative of the fact that the rate of increase in operating expenses is greater than the rate of increase in revenue. This proves the owner's position relative to the inadequacy of RGB rent increases over 25 years. 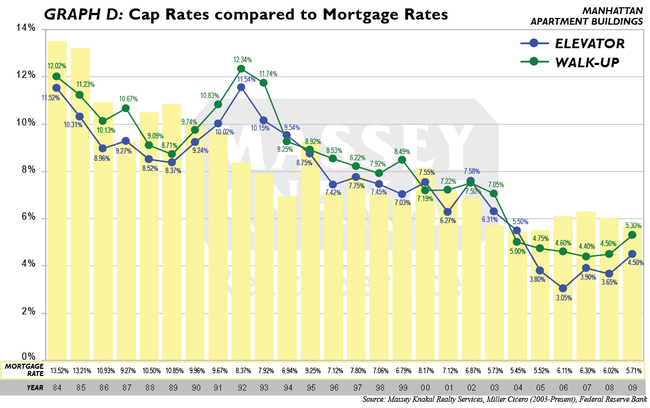 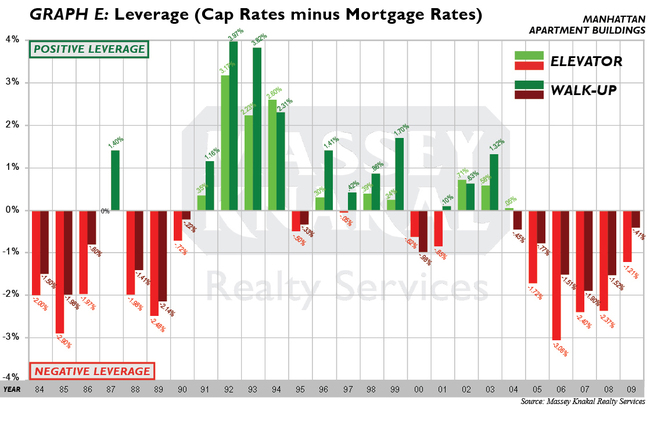 New York City real estate hit bottom in 1992. Sales volume hit an all-time low of 1.6% of the total stock of multifamily and mixed-use buildings (the average turnover had been about 2.6% during this 25-year period). Most of the sales were on foreclosed properties.  We also saw cap rates hit cyclical highs and GRMs hit cyclical lows. In the walkup sector, cap rates increased to 12.34% with the average GRM hitting 3.57. For elevator buildings, cap rates increased to 11.54% and the average GRM hit 4.11.

These cap rates were only very slightly higher than those we saw in 1984--but those numbers by themselves are misleading. Compare these figures:


In 1992, positive leverage hit a 25-year high at 3.17% for elevator properties and 3.97% for walkups (See Graphs D & E). Additionally, the return spreads above the 10-year T-bill hit 25-year highs: 475 basis points for elevator properties and 555 basis points for walkups. To give you some perspective on these numbers, look at Graphs G & H, which illustrates that over 25 years those risk premiums averaged only 107 and 178 respectively.

For the next two years, this market was dominated by sales of distressed assets--by private owners who had no option but to sell, or by the Resolution Trust Corp. But by the mid-1990s, real estate fundamentals were improving and real estate capital markets were returning to normal. There were several reasons for this: 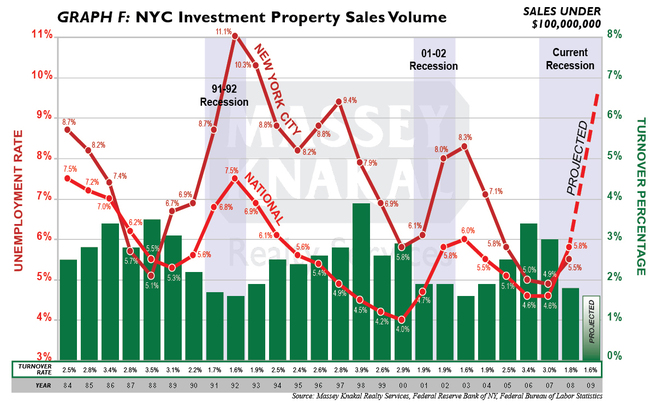 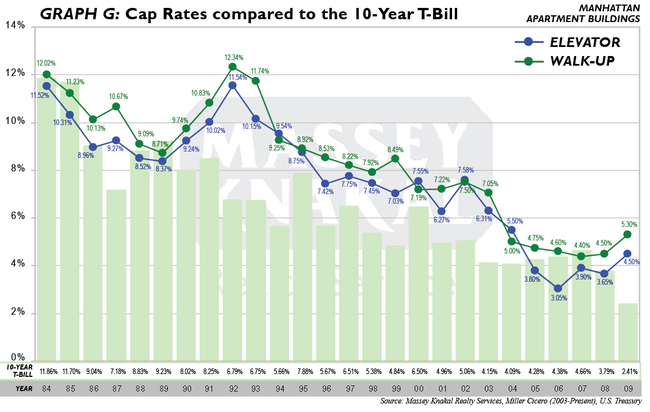 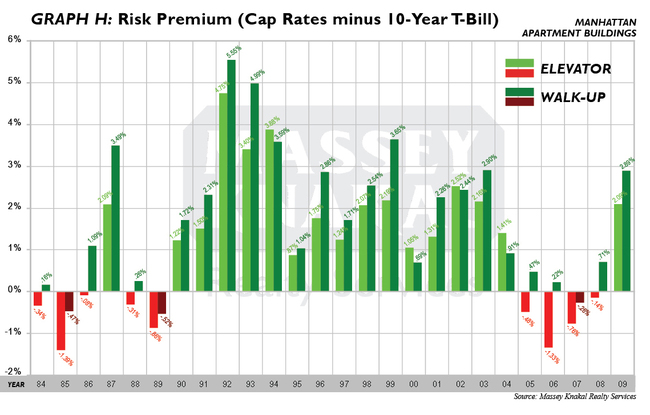 From 1994 through 1999, we saw slow steady declines in cap rates, with slightly positive leverage, and risk premiums within a range of 100 to 250 basis points. During this period, GRMs also began a slow steady climb. Throughout the 25 years of this analysis, this period was the most stable--and I attribute that stability directly to the very disciplined lending practices of debt providers. Memories of the over-leveraging of the 1980s and the distress of the early 1990s were still very fresh in their minds. In 2000, the market began to take advantage of the momentum created in the previous five years, and we saw distinct cap rate reductions and GRM increases from 2000 to 2001. Risk premiums during this time were at the lowest they had been since 1995, and we saw negative leverage return for only the second time since 1991 (See Graph G).

The recession that began in 2001, when the tech bubble burst, had only a slight effect on our market in terms of price--at first. Cap rates and GRMs remained fairly flat in 2001 and 2002. However, there is no metric that impacts the fundamentals of our real estate markets more than unemployment--and by 2003, the recession had impacted the local employment rate to the point where the fundamentals of our real estate market were highly stressed. In 2003, cap rates did drop, and GRMs increased--and sales volume was back to its all-time low of 1.6% (See Graph F).

However, something else was brewing: something that would change the industry and lead us into the predicament that we face today.

Note, on Graphs B & C, the dramatic divergence between rising GRMs and plunging cap rates seen from 2003 to 2007. During this period, we saw CMBS issuance reach $93 million in 2004, $169 million in 2005, $206 million in 2006 and $230 million in 2007. This explosion of capital available to real estate--both from traditional banks and from "shadow" institutions -- stimulated our market like nothing we had ever seen before.

It was "déjà vu all over again." As in the mid-1980s, leverage and risk premiums both reverted into negative territory. Practically any type of multifamily property was a candidate for conversion to condominium ownership. Cap rates slid as low as the mid-3s. We knew these numbers weren't sustainable--and we've been proven right, the hard way.

So where do we go from here? Based on the massive amount of government intervention we've seen as a reaction to our present recession, a period of significant inflation is likely. The Federal Reserve will try to keep that inflation within its comfort zone--1% to 2%--and will utilize monetary policy to try to do so. That means higher interest rates.

Loose lending standards have been blamed for having a part in high prices we saw in the past few years--but now the portfolio lenders, who currently drive our multifamily market, are lending much more conservatively. They're typically offering 55% to 65% leverage, as opposed to the 75% to 85% that was obtainable three or four years ago.

With debt more expensive and less available, we've seen a strong shift in the buyer profile. For much of the period from 2004 to 2007, most buyers of multifamily properties were local operators, investing with equity from institutional partners. For the past year or so, though, the typical buyer has been the high-net-worth individual or the old-line New York City families that have been around for decades. Those investors can provide all their own equity, and use little or no leverage.

Those investors have a lot of capital, and they're eager to place it in the currently depressed market. But it remains to be seen whether commercial real estate will remain a favored assed class with other investors. History would indicate that if interest rates increase, and lenders employ conservative underwriting, we will enter another period of positive leverage where cap rates will reach levels higher than mortgage rates. But what will these graphs presented here look like in 10 years? If there's one lesson we've learned from this quarter-century overview, it's that the market is constantly shaped by external events--and by investors' reactions to them.