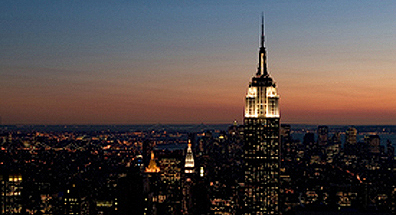 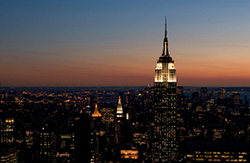 Based on a new report by Jones Lang LaSalle called the North American Skyline Review, after two years of steady new development deliveries and increasing sublease options, supply dynamics have stabilized, rents have bottomed out and landlords have begun to scale back tenant improvement allowances at top office properties across the U.S. and Canada. As a result of these supply-demand dynamics, investor interest for this type of product has heated up, causing activity and pricing to jump and yields to compress.

In New York, vacancy rates among Midtown's trophy properties have dropped considerably since year-end 2009, tightening from 13.1 percent in December 2009 to 10.1 percent at year-end 2010. Rents for Midtown Class A buildings reached their peak at $96.00 per square foot in the winter 2008 and, since then, pricing has fallen by nearly 32 percent. Net effective rents, which include periods of free rent and landlord work allowances, were down by 46 percent from peak.

Overall, New York's trophy market posted the first increase in average asking rental rates since spring 2008. In the second half of 2010, the city's top-end office buildings saw rents increase nearly 1 percent compared to a 1.7 percent decrease in the first six months of the year. Rates for the city's trophy properties rose to $68.09 per square foot in winter 2010 from $67.58 per square foot six months earlier.

"Since New York's office market has reached bottom, activity is expected to strengthen in the near-term, with recovery beginning at the top end of the market," said James Delmonte, vice president and director of research for Jones Lang LaSalle's New York office. "Average asking rents among Midtown's trophy set of properties have moved higher in recent months. Several of the submarket's top-end buildings have recorded asking rents north of $100 per square foot on some select spaces."

Jones Lang LaSalle's Skyline reports--known as Trophy, AAA or Tower Market reports in some cities--provide a unique perspective of office market trends across a selective group of Class A buildings in urban areas. This top tier of buildings, representing 30 percent of total CBD office space, historically has been the market-moving segment of the office sector, leading the overall market through downturns and expansions. The North American Skyline Review combines data from 21 U.S. and Canadian markets to gain a broader insight into near-term market trends.

"Rents have stabilized and even started to grow in many Skyline segments of the market, while overall market rents across non-Skyline buildings likely have about six months until bottoming out," said John Sikaitis, Senior Vice President of Research at Jones Lang LaSalle. In many markets, there are few large block space options in Skyline buildings. "Due to space limits in this segment of the market, we will see rent growth in the near term and potentially rent spikes over the next 24 months as new construction could be the only viable alternative for larger tenants in some of these markets," said Sikaitis.

Of the 21 markets studied, 15 experienced positive net absorption in 2010, with four markets--Charlotte, New York City, Toronto and Denver--absorbing more than 1 million square feet each. Despite accounting for approximately 30 percent of the CBD markets and less than 15 percent of the overall metro markets, on average, numerous markets such as Atlanta, Boston, Charlotte, Denver, Fort Lauderdale, Miami, Philadelphia, and Stamford, saw Skyline buildings account for all of the positive absorption metro wide, and then some.

"We typically see demand levels in this product type lead demand levels of the overall market by 12 to 15 months. The tenants that migrate to this type of product are industry leaders for the most part and see their profit margins and business grow before the overall macro economy demonstrates signs of universal growth," Sikaitis said.

Fifteen of the markets experienced a drop in average asking rents during 2010, but the decline was less than 2 percent in four of the 15 cities, and only one market--Stamford--saw rents in Trophy buildings drop by more than 10 percent. Rent declines occurred mainly in the first half of 2010; as demand levels picked up, rents stabilized in the second half of the year.

After 2009 saw only 11 investment trades across Skyline buildings, generating less than $3 billion in volume, investment activity in 2010 totaled 33 different sales, fueling more than $10.1 billion in Skyline volume in 2010. "Investors returned to the market in 2010 and allocated the majority of their investment allocation into core properties across Skyline buildings," said Sikaitis. Skyline buildings registered a 169.0 percent increase in total square feet of office product sold, while pricing increased 7.2 percent on a per square foot basis and yields declined 110 basis points to average 6.1 percent.

The velocity of recovery in New York outpaced the global and U.S. markets. The $12.1 billion in New York transactions seen in 2010 represented a 245.7 percent increase over $3.5 billion in 2009. Pricing accelerated through the year and office properties are now selling at values close to market peak. The year finished with an emphatic statement as Google purchased 111 Eighth Avenue for $1.77 billion, nearly $600 per square foot. Evidence of market strength is further illustrated by the sale of 434 Broadway which achieved the same price at the end of 2010 as it did in 2007, the peak of the market. In both transactions the property sold for $41.0 million or $654 per square foot.

"Real estate capital markets have changed dramatically in the last year as the doldrums of 2009 have given way to renewed optimism and improvement in many sectors of the economy, said Delmonte. "The resilient local economy, low cost of money, and improving office market fundamentals have contributed to the resurgence of the New York City investment sales market. With low-risk investments barely keeping pace with inflation, investors are lining up to invest in New York City real estate." 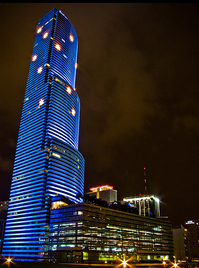 2011 has already seen the trades of several buildings, including 3344 Peachtree in Atlanta, 1800 Larimer in Denver, Market Square in Washington, DC, signaling that investor interest for this type of product will continue to be strong in 2011. "Due to intense competition in the leading Gateway markets of New York City, Boston, Washington, DC and San Francisco, we believe investment allocation will widen to incorporate more geographies in 2011 and 2012, as we saw with the 1800 Larimer trade drawing intense competition, " said Sikaitis.

Chicago: "In the coming year, deal velocity will increase as the decision-making process accelerates; however, space needs should remain flat. Continuing the trend from 2010, activity will include a variety of relocations, renewals and subleases, but overall shifts in size, positive or negative, should average out," said Rena Christofidis, Vice President Midwest Research at Jones Lang LaSalle. It is also highly unlikely that a new building will be kicked off in 2011, thus supply dynamics will remain constant for a few more years.

New York: Recovery in the Trophy sector will continue to outpace the larger Manhattan market. "Landlords in Trophy properties appear eager to raise asking rents, and evidence shows that some tenants are again willing to pay top dollar for the best space. Whether there will be sufficient demand to push average Trophy rents significantly higher in the near-term is less clear," said Jim Delmonte, Vice President Tristate Research at Jones Lang LaSalle. While high-end financial services: hedge funds, private equity are responsible for driving prices at the very top, several large-plate Trophy properties depend on more typical financial activities, such as traditional banking and trading operations, for occupancy in the base and middle floors of their buildings. Mid-size and large blocks of space, here, are still not in great demand

San Francisco: The Skyline buildings maintained occupancies and held rents firmer than the overall market during the downturn and are now leading an accelerating recovery. "The outlook moving into 2011 is promising, as tenants are confident that business is back on track and ready for new growth. Leasing fundamentals still have plenty of upside ahead and that's sure to bring higher property values in the years ahead," said Colin Yasukochi, Vice President Northwest Research at Jones Lang LaSalle.

Washington, DC: Occupancy gains will persist in 2011 as law firms resume hiring and government affairs groups continue to grow their presence. "Tenants' willingness to pay a premium for views, location and amenities will continue to drive prices and leasing activity in the market, with net effective rent growth forecasted to reach double digits over the next two years as conditions tighten," said Scott Homa, DC Research Manager at Jones Lang LaSalle.