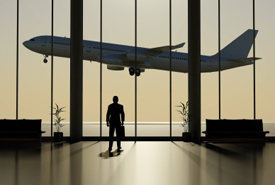 (ORLANDO, FL) -- According to the American Automobile Association (AAA), 92.3 million Americans are projected to be traveling 50 miles or more from home during the year-end holidays, an increase of 3.1 percent from the 89.5 million who traveled a year ago. The year-end holidays travel period is defined as Thursday, December 23, 2010 to Sunday, January 2, 2011.

"It's great to see so many Americans taking to the roads, rails and skies this holiday season, especially since this is the fifth consecutive holiday period this year in which AAA has predicted a year-to-year increase in the number of travelers," said Glen MacDonell, director, AAA Travel Services. "After a challenging year in 2009, a modestly improved economic environment and pent-up demand resulted in more Americans traveling in 2010, and the year-end holidays are no exception."

AAA's projections are based on economic forecasting and research by IHS Global Insight. The Boston-based economic research and consulting firm teamed with AAA in 2009 to jointly analyze travel trends during the major holidays. AAA has been reporting on holiday travel trends for more than two decades.