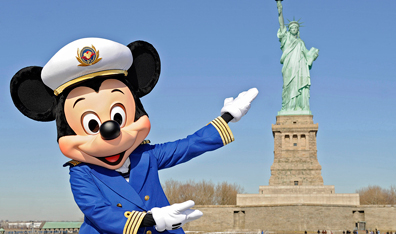 
For the first time ever, Disney Cruise Line will set sail from three new ports in 2012 - New York, Seattle and Galveston, Texas - making the Disney family cruise vacation more accessible to guests around the country. Additionally, the cruise line will offer more choices than ever before with several new itineraries planned.

"In 2012, we're making it easier than ever for families to enjoy a Disney Cruise Line vacation by offering cruises from a variety of regional homeports," said Disney Cruise Line President Karl Holz.  "Guests can now enjoy a magical, one-of-a-kind Disney cruise experience with the convenience of departures from their own backyard."

Beginning May 25, 2012, the Disney Magic will sail a total of 20 cruises from New York - including eight-night cruises to the Bahamas and five-night cruises up the New England coast to Canada plus two-night cruises that will give a sampling of the Disney Cruise Line experience over a weekend: 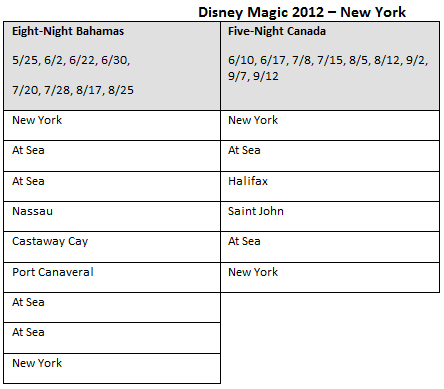 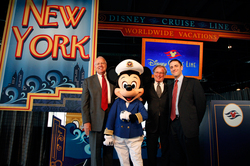 Beginning Sept. 22, 2012, the Disney Magic will sail 12 seven-night cruises from the Port of Galveston to the Western Caribbean. Ports of call include Grand Cayman and Mexico's Costa Maya and Cozumel.

A Caribbean cruise on the Disney Magic offers families a tropical getaway with world-class entertainment and impeccable guest service found only on a Disney Cruise Line vacation. Guests will enjoy three magical days at sea to explore all of the fun aboard the Disney Magic and three days in port to lounge on warm, golden beaches, to swim and snorkel in azure waters or to shop to their heart's content in exotic marketplaces.

Rates for the seven-night Western Caribbean cruise itinerary departing from Galveston start at $840 per person for a standard inside stateroom, based on double occupancy. 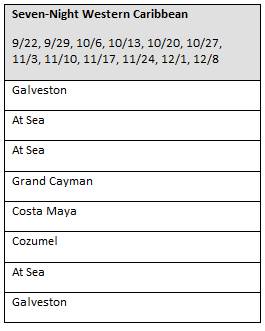 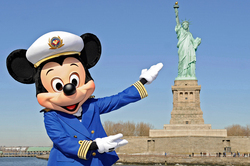 Beginning May 28, 2012, the Disney Wonder will sail a total of 14 seven-night cruises from the Port of Seattle to Tracy Arm, Skagway, Juneau and Ketchikan, Alaska, as well as Victoria, British Columbia.

On their Alaskan adventure, guests may catch a glimpse of a brown bear, bald eagle or humpback whale. They can explore magnificent glaciers and fjords in Juneau. In Ketchikan, guests can fish for some of the largest wild salmon in the world and learn about local culture through hand-carved totem poles. In Skagway, Disney Cruise Line guests can traverse panoramic landscapes by railway, or pan for gold like miners from the famous Klondike gold rush.

Rates for the seven-night Alaska cruise itinerary departing from Seattle start at $917 per person for a standard inside stateroom, based on double occupancy. 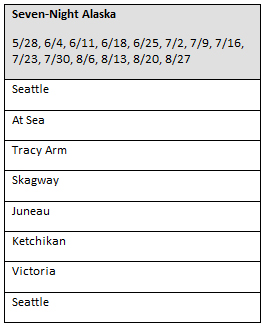 The Disney Wonder is scheduled to continue sailing seven-night Mexican Riviera cruises from the Port of Los Angeles for the majority of the year - throughout winter, spring and fall.

Rates for the seven-night Mexican Riviera itinerary departing from Los Angeles start at $707 per person for a standard inside stateroom, based on double occupancy. 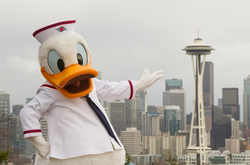 Rates for the new seven-night Pacific Coast itinerary departing from Los Angeles start at $770 per person for a standard inside stateroom, based on double occupancy.

For the first time, the Disney Wonder will offer a special 15-night voyage to Hawaii from Los Angeles, calling on Hilo; Kahului, Maui; Honolulu, Oahu; Nawiliwili, Kauai and Ensenada, Mexico.

Rates for the 15-night Hawaiian itinerary (departing April 29, 2012) start at $1,800 per person for a standard inside stateroom, based on double occupancy.

The Disney Fantasy and Disney Dream will continue to sail a variety of Caribbean and Bahamian itineraries departing from Port Canaveral.