Is the Gray Cloud About to Pass?


The Traveler Sentiment Index  from our April travelhorizons survey reveals a significant increase in perceived "money available for travel" (82.4 in April 2010, up from 70.3 in April 2009), suggesting that consumers are now more confident about their personal finances and may, therefore, be more inclined to make discretionary expenditures on travel services than they were one year ago. Three of the six variables from which the index is derived ("interest in travel," "time available to travel," and the aforementioned "money available for travel") are increasing, while the remaining three ("affordability of travel," "perceived safety of travel," and "quality of travel services") are declining. The greatest decrease was observed in the "perceived affordability of travel" (down from 118.6 in April 2009 to 103.5 in April 2010), signaling that recent efforts by many travel service suppliers to increase fares and rates have not been lost on the traveling public. 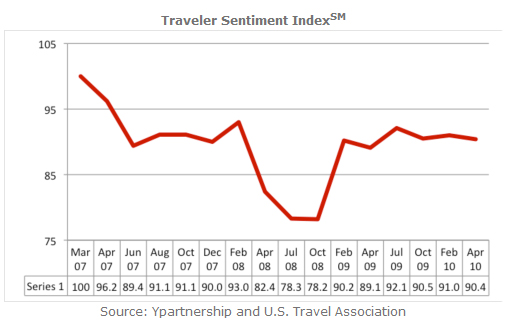 Among the financial factors that influence interest in near-term leisure travel, most of the year-over-year changes reveal a positive trend. Although the higher cost of a gallon of gasoline and the rising cost of air travel were cited as growing concerns, the percentage of U.S. adults citing "high level of personal credit card debt" fell from 56% in April 2009 to 46% in April 2010. The percentage mentioning "value of investment portfolio" fell by 14 points. On a less encouraging note, however, concerns about potential job losses and the expected decline in income in the year ahead represent causes for concern. 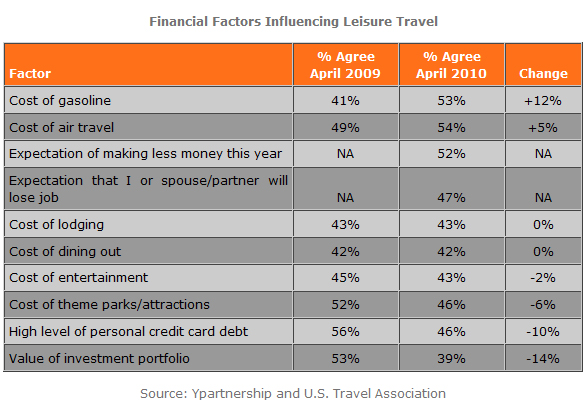 Although it may be premature to declare this the beginning of the long-awaited recovery of the travel industry, the data suggest we have finally bottomed out and are now poised for a rebound.