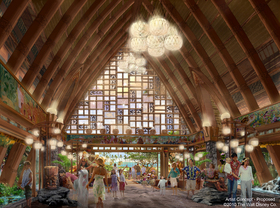 (KO OLINA, HAWAII) -- It's all in the name, just ask The Walt Disney Company (NYSE:DIS).

The highly anticipated Disney destination resort currently under construction on the Hawaiian island of Oahu now has an official name - Aulani.

"We want this resort destination to reflect the vibrant culture that surrounds it. The name 'Aulani' expresses a connection to tradition and deep story-telling - and its roots are here in this land," said Joe Rohde, senior vice president, Creative for Walt Disney Imagineering. "We're so grateful to the local Hawaiians who led us to the discovery of this name, and our goal is to live up to its meaning."

The resort itself is located nearby to historical sites on the western side of Oahu on 21 acres of oceanfront property in the Ko Olina Resort & Marina development. The resort is planned to have 360 hotel rooms and 481 two-bedroom equivalent Disney Vacation Club villas.

Design plans call for amenities to engage every member of the family, a hallmark of a Disney vacation. Among the recreational highlights planned for the resort are pools and sunset-facing hot tubs, a snorkeling lagoon, a variety of kids' club and other play programs for children, and a river, suitable for tube floating, running through a specially created volcanic outcropping.

The resort will also include an 18,000-square-foot spa designed with families in mind. The resort, built adjacent to a crystal-blue lagoon and a white-sand beach, is planned to also have two restaurants, a 14,545-square-foot conference center and 48,685 square feet of outdoor venues. Located nearby are the existing Ko Olina Marina and a Ted Robinson-designed, 18-hole championship golf course. 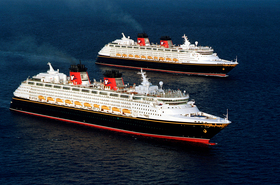 "We are looking forward to welcoming guests to Aulani to share the fun, immersive family vacation experiences Disney is known for combined with the beauty and culture of Hawaii," said Djuan Rivers, vice president, Disney Vacation Club and Resort, Hawaii. "We are turning to the Hawaiian culture for inspiration in everything we are doing at Aulani, and we hope our guests will not only enjoy the Disney experience, but will also embrace the unique culture of Hawaii and its diverse people." 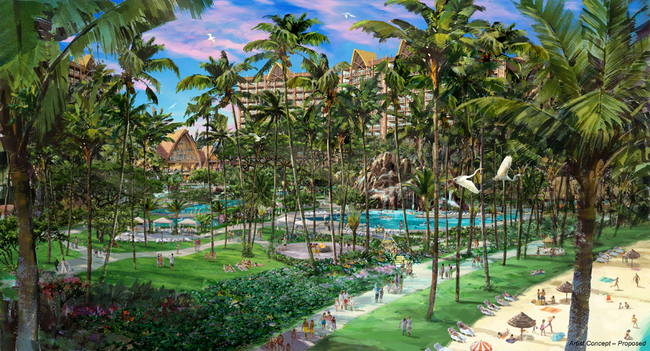