(ORLANDO, FL) -- According to our October 2009 survey, 53% of all U.S. households are planning at least one leisure trip between now and April 2010, down slightly from the 56% who stated the same intention in October 2008. Concerns about "the household budget" remain the primary deterrent to future leisure travel (cited by 39% of those not planning a trip), yet the incidence of this concern is now at the lowest level we have observed since we began to include this question in the survey. The most significant decline in expected trips is among younger members of our population (Gen X and Gen Y), while the incidence of leisure trips taken by Boomers is expected to increase. On an even more positive note, among those planning to travel, the expected average number of leisure trips that will be taken during the next six months is up to 3.0 from 2.8 in October 2008.

The outlook for business travel remains mixed, with only 18% of adults planning at least one business trip (including to attend business meetings and conventions) between now and April of 2010, essentially unchanged from the number we recorded last July (17%). Expectations with respect to the average number of business trips provide some encouragement, however, as this number has increased steadily throughout the year, rising from an average of 3.3 in April to 4.8 in October. This average is being driven up by a relatively small percentage of the overall population of business travelers though: only 6% intend to take "more business trips" during the next six months (24% expect to take "fewer").

These industry "vitals" are summarized in the table below: 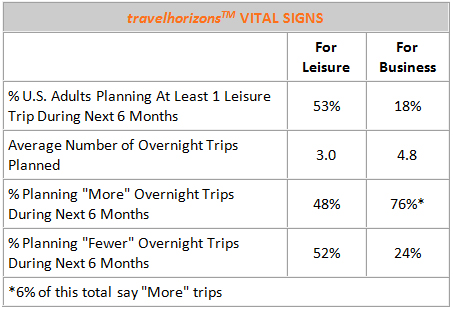 Finally, the overall Traveler Sentiment Index (a derivative of six different variables measured in the survey) suggests that demand for travel services is likely to remain flat during the next six months as revealed below: 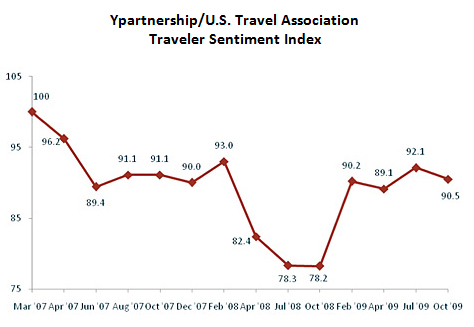