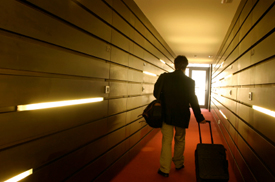 According to Smith Travel Research (STR), the U.S. hotel industry posted increases in all three key performance measurements during June 2010.

In year-over-year measurements, the industry's occupancy was up 6.9 percent to 65.0 percent. Average daily rate ended the month with a 1.0-percent increase to US$98.33. Revenue per available room for the month rose 8.0 percent to finish at US$63.87.

"After months of recovering room night demand, the U.S. hotel industry finally reported ADR growth in June," said Mark Lomanno, president of STR. "While this is certainly an encouraging sign, virtually all the increase in room rates was found in upper-end hotels and those in New York City. The industry's recovery will not be in full swing until room rate increases are seen in a much wider swath of industry segments."

All of the Top 25 Markets reported increases in occupancy for June. Oahu Island, Hawaii, reported the largest increase, rising 17.5 percent to 78.8 percent, followed by Minneapolis-St. Paul, Minnesota-Wisconsin (+16.4 percent to 71.6 percent), and Denver, Colorado (+15.3 percent to 76.6 percent).