Vacancy rates in Bangkok's office market fell below 10 percent for the first time in 20 years in 2013, due to a combination of increased demand for office space and limited new supply.

The total amount of space occupied in 2013 increased by 220,000 square meters, marking the best performance since 2005, according to a latest report from CBRE Thailand. 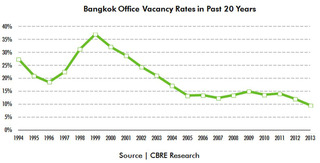 At the end of 2013 the total office stock in Thailand's capital was 8.1 million square meters, with an occupancy rate of 90.4 percent as occupancy improved in all locations and all grades.

Between now and 2016, only 450,000 square meters of new office space is due for delivery. Some of this new space will be owner-occupied and not available for rent. High shortages of new supply, especially for larger requirements, is leading to more tenants pre-leasing in buildings under constructions, the firm states. 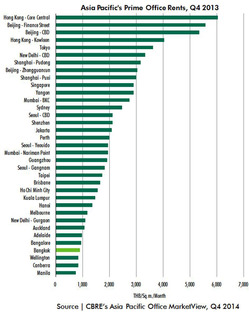 Office rents are forecast to increase in Bangkok due to high occupancy and limited new supply. The only two new grade A buildings due this year are AIA Capital Center on Ratchadapisek Road, to be completed in the third quarter, and Bhiraj Tower at EmQuartier at the Phrom Phong BTS station due in the fourth quarter. Both buildings have tenants already committed to space.

In the region, only Manila, Wellington and Canberra are cheaper office markets than Bangkok. By comparison, Central Hong Kong office rents, which top the world as most expensive, are six times more expensive than the best office locations in Bangkok.

Park Ventures on the corner of Wireless and Ploenchit Roads remains the most expensive office building in Bangkok with rents of THB 1,000 ($31) per square meter.

Looking ahead, Bangkok's office market outlook is uncertain because of the political situation, according to the firm.

"To date, we have seen no companies closing and no delays in ongoing leasing transactions, but we have seen a drop in enquiries," Mr. Nithipat Tongpun, executive director - head of office services at CBRE Thailand, said in the report. "Even if 2014 office demand is weak, rents are unlikely to fall because of the high occupancy levels and limited new supply."