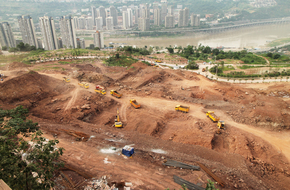 Based on data from Jones Lang LaSalle new report released today titled China50: Fifty Real Estate Markets that Matter, China's commercial office and retail sectors are about to add a biblical amount of commercial product to their inventory to meet the phenomenal speed of economic growth of their people over the next eight years. Jones Lang LaSalle's China50 report is an in-depth study of future commercial real estate opportunities in China.

KK Fung, managing director for Jones Lang LaSalle Greater China informs World Property Channel, "The new China50 are being transformed at an unprecedented rate by the scale of building and by the progress of economic development. They are the cities that we believe will be hitting the headlines over the next decade and that will provide opportunities beyond the familiar Tier I cities."

Michael Klibaner, head of research for Jones Lang LaSalle China as commented, "These 50 cities combined are expected to account for 12% of overall global economic growth over the next decade and China50 contains all of the world's ten fastest growing large cities, led by Chongqing, Tianjin and Chengdu. These numbers are a clear signal that China50 is one of the world's most exciting real estate opportunities." 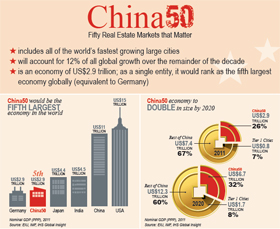 The development of over 100 million sq. meters or over 1 billion sq. feet (1 sq. meter = 10.76 sq. ft.) of commercial space over the next decade is bringing much needed high-quality stock to these 50 cities. As developers move deeper into China50, it is also helping to support the expansion of domestic and international corporates, retailers and hotel operators across the China50, into Tier 3 cities as they tap into favorable demographics and seek 'first mover' advantage.

"As the volume of tradable property assets increases and transparency improves, institutional investor interest in commercial real estate in the China50 will increase.  Their focus will be on the retail sector, which provides the largest real estate opportunity, driven by strong growth in China50's middle class population, which is expected to double to over 125 million by the middle of the decade." noted Mr. Fung. 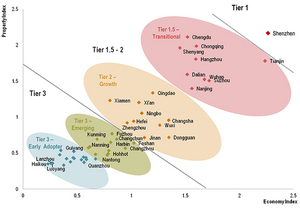 Significant opportunities also exist in the logistics sector where there is a severe under-provision of international grade stock; China's total modern logistics stock is barely equally to that of Boston in the United States. Prospects for logistics will be further boosted by improving transport infrastructure, retail growth and a shift inland of China's manufacturing base.

KK Fung concluded, "The China50 offers a compelling long-term growth story, but the road to maturity is unlikely to be smooth and fears of excessive risk may lead to some caution in the property market over the short to medium term.  They will not be immune from volatilities in the global economy, but importantly, some China50 cities, such as Chongqing, Wuhan and Xi'an may prove to be more resilient than most, underpinned by the structural growth of China's domestic economy."