Hong Kong's retail market leads the world as the most expensive city for global retailers, by a large margin, while prime rents in major markets such as New York, Paris and London reach record-breaking levels.

CBRE's data shows prime retail is strong and leading locations are becoming stronger, due to higher demand from high-end retailers willing to pay record rents amid historic-lows for development.

"There has been a lot of discussion about the strength of luxury retailers versus those that serve the mid-market," Raymond G. Torto, global chairman, CBRE Research, said in the report. "New York, Paris and London have seen prime retail rents rise 11, 28 and 18 percent respectively year-on-year from levels that are already in the stratosphere."

In Hong Kong, retail demand is focused on prime locations rather than secondary streets. The most popular prime streets are Russell Street in Causeway Bay, Canton Road in Tsim Sha Tsui, and Queen's Road Central in Central.

In the U.S., prime asking rent growth during the fourth quarter was led by the Northeast region with Newbury Street in Boston (6.7 percent quarter-over-quarter), Walnut Street in Philadelphia (5.8 percent q-o-q), and Fifth Avenue in New York (4.8 percent q-o-q) recording the largest increases.

In Paris, prime rents have increased 80 percent since the first quarter of 2012, due to high interest and very little availability, CBRE reports.

Australia was the only country with two cities ranking in CBRE's top 10 highest retail rents. Melbourne, which ranked ninth in the world, was the most popular landing spot for fast retailers in 2013, with the first Australian stores of UNIQLO, H&M and Forever 21. 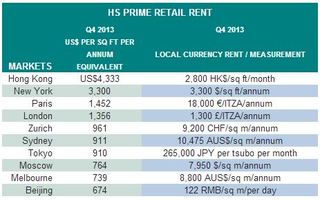 As Japan's economy recovers, consumer confidence has reached its highest level since 2005. Tokyo ranked seventh on the list and remains one of the key gateway cities for retailers looking to enter Asia Pacific.

"Fast fashion brands meanwhile are seeking opportunities in core submarkets, while F&B operators are increasingly popular with landlords of shopping malls, especially those in secondary locations due to their ability to attract footfall," CBRE reports.