Despite Global Economic Uncertainty in 2013, Prime Office Rents to Grow in Majority of Tier-One Cities Worldwide 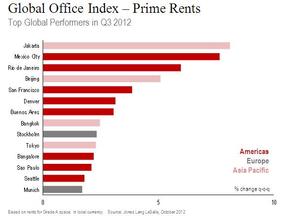 According to the Index, the markets with the strongest rental growth prospects include: Beijing, San Francisco, London, Tokyo, Moscow, Hong Kong and Sydney.

While the overall outlook shows rising rents next year, Jones Lang LaSalle's analysis of global rental growth in the third quarter 2012 show a deceleration in office rental growth to 0.2 percent, down from 0.6 percent growth in the second quarter of 2012. A third of the markets covered by the Index registered rental declines in the third quarter, compared with just a quarter of all markets in second quarter, reflecting a range of factors including weak corporate occupier demand particularly from the financial sector, oversupply or poor economic fundamentals. 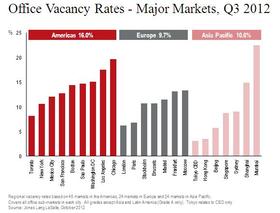 "On an annualised basis, prime rents were up two percent, which while registering positive momentum that still represents the lowest year-on-year growth in two years," said Jeremy Kelly, Director in Jones Lang LaSalle's  Global Research team. "Not all global markets are moving with synchronicity and there are a number of top performing markets to watch- Jakarta, Mexico City, Rio de Janeiro and Beijing- as the BRIC and MIST office hubs registered the fastest rental growth. Tech-rich markets such as San Francisco and Stockholm are also performing well." 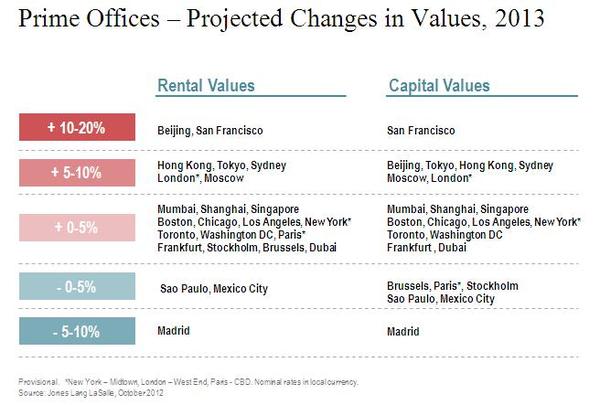