Since its low in Q2 2009 the Prime Global Cities Index - which tracks the performance of the top 5% of mainstream housing markets - has been largely subdued, recording average quarterly growth of 0.8%.

The buoyant Asian markets kept the index in positive territory up until Q1 2012 when cooling measures and in particular restrictions on second-home ownership, led to a fall of 0.4% in the first quarter of 2012. 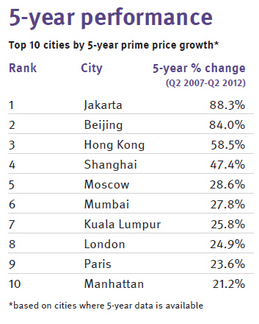 That said, Asia and Europe have proved critical to the index's recovery in the second quarter.

The growth in Europe's prime prices has taken place despite - or possibly because of - the deepening Eurozone crisis. With the prospect of more bailouts looking increasingly likely, prime buyers and investors seem to have separated European cities into different tiers. Buyers and investors are no longer just concentrating on those cities that attract a high level of international demand and a good quality of life but the latest results suggest they are increasingly seeking prime property in those cities best sheltered from the EU debt debacle. London, Geneva, and Zurich are all positioned in the top half of the Q2 results table having recorded annual price growth of 10.5%, 6.0%, and 5.9% respectively.

According to James Price, of Knight Frank's International Residential Development team, the positive performance of some of the more established cities in Europe and the US suggests that a 'flight to safety' remains the defining characteristic of international purchasers and investors.

James comments, "The appeal of cities in stable economies is being brought into marked contrast with the investment environment in weaker countries. This city-level data should not however be taken as a reflection of the whole country; prime second-home destinations outside the cities may still perform well in a poorer performing wider market."

Despite the positive results in Q2, the overall outlook for the world's prime markets is muted. We are unlikely to see significant sustained growth given the numerous downside risks facing the global economy. Europe's economic frailty together with the introduction of more protectionist measures in Asia (aimed at improving affordability for domestic buyers), is expected to inhibit price inflation within both the mainstream and prime markets for the remainder of 2012.