Will one of the world's oldest and largest fish markets turn into American style casino resort? This thought must have recently been on people's minds when locals heard of the possibility.

Yes, there have been a lot of speculation about Japan welcoming casinos as Tokyo is getting ready for the next Olympic game.  However, going from a very traditional and historic 80-year old fish market to a very unconventional casino site is a major change to get used to.

It is rumored The MGM Resorts International (MGM) is scouting the world's biggest fish market as a potential site for their casino resort, and they need minimum 30 acres of land according to Ed Bowers, MGM's senior vice president for global gaming development.  Although MGM in Las Vegas reported 4% revenue increase in the 2014 second quarter from the previous year according to NASDAQ, it is still behind from its competitors, Las Vegas Sands and Wynn. 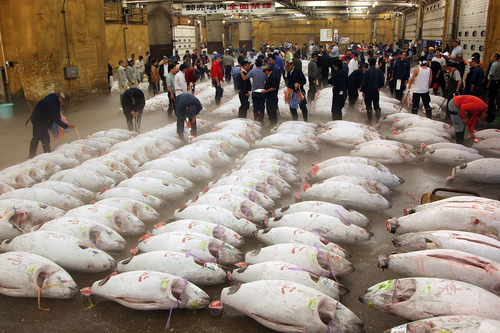 MGM's delayed expansion in the Asian market is said to be the reason, and now they must try to catch up with their expansion by establishing its resort in Japan market.  The Tsukiji's 57 acres of land right in the very expensive central section of Tokyo (Minato Ward) is likely to be available for sale in the very near future.  This location near the luxury shopping enclave of Ginza will be one of the largest parcels ever offered for redevelopment in the Japanese capital.

This would be an alternative to the Odaiba district that's another candidate site for a gaming resort due to a strong desire by former Tokyo Governor Shintaro Ishihara.  However, in spite of the even higher cost, Tsukiji may be more ideal when its central location with easy access and the numbers of visitors are put into consideration.  As a matter of fact 42,000 people are visiting there daily, mostly to see the early morning's annual $4.1 billion worth of expensive tuna auction.

The Tsukiji fish market will be relocating to a reclaimed land in Tokyo Bay about four kilometers (2.5 miles) away.  Once most of the almost 800 fish venders relocate to the new site by early 2016, Tokyo is likely to put the parcel for sale according to the city official that manages the market.  "Land that's owned wholly by the city that's big enough may take less time to assemble than a piece of land that's owned by multiple parties," Ed also said.

Although it is not only MGM that expresses the interest, city official declined to identify the other big casino operators.

The land of the rising sun may need a big change with open eyes to adopt to the new era, since the concerns for a long-term healthy economy is constantly voiced because of its aging society and the lack of younger generations to support it.

Who knows, Tokyo may even become the next Macao.