According to STR Global's Japan Hotel Review, hotel performance in Japan understandably has suffered following the earthquake and tsunami in March 2011, but the country's hotel industry is making a comeback.

The launch of the STR Global Japan Hotel Review coincides with the expansion of the sample of participating hotels in Japan to 316 as of November 2011.  This is an increase of 66 hotels or 26.4 percent since December 2010.

"We are delighted to witness the resilience of the Japanese hotel market seen in the upturn of performance following the dramatic earthquake and tsunami in Japan last March", said Elizabeth Randall, managing director of STR Global. "We can now better serve this valuable market, and the Japan Hotel Review will enable our clients to continue following the performances of 24 segments in one report, from country-level down to Tokyo split by class on a monthly basis".

Japan's hotel industry reported dramatic falls in year-on-year revenue per available room (RevPAR) in the aftermath of the disaster, but those have been replaced by steady monthly improvement.

The growth of STR Global's hotel sample in Japan allows reporting on four additional markets all on Honshu, the largest Japanese island. To the northeast is tourist region of Tohoku, the area most affected by the earthquake and tsunami, and on the northwest coast of the Sea of Japan is Hokuriku within the Chubu region. Also new is Yokohama, the major commercial hub just south of Tokyo and the Kanto Regional market covering the area surrounding Tokyo.
Hotel performance as measured by the year-on-year percentage change for the three key performance indicators of occupancy, average daily rate (ADR) and RevPAR shows that the year-to-November 2011 (YTD) has been understandably difficult for most markets. (See table below.) 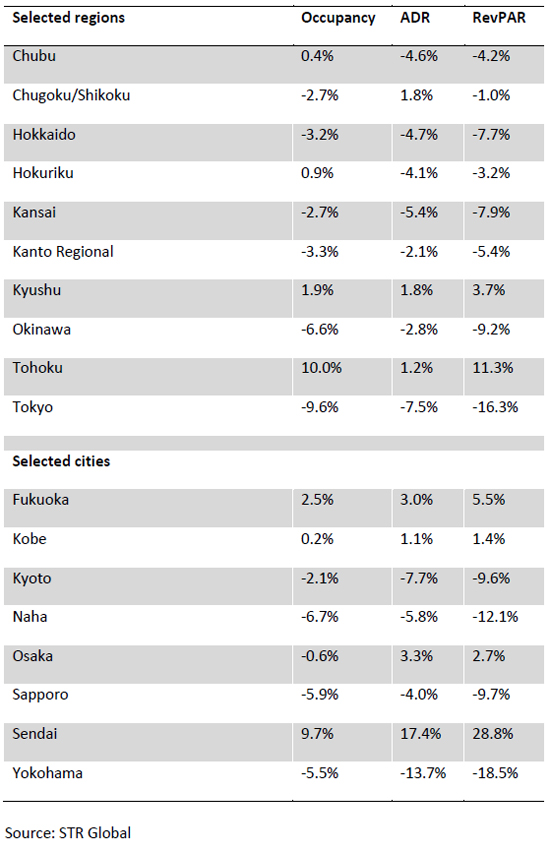