Approximately 14.1 million square meters of new shopping center space is expected to be delivered across Europe in the next two years, according to a new report from JLL.

The largest share of shopping center space will be delivered in Russia, with 3.8 million square meters of new space scheduled for completion by 2015. 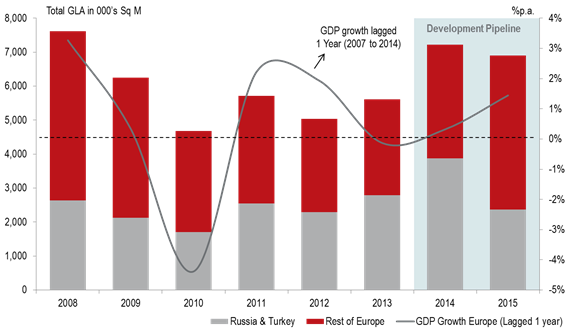 Another 6.9 million square meters of new shopping center space is expected in 2015, increasing 26 percent from the five-year average.

The majority of new projects continue to be developed in Russia and Turkey, with almost 50 percent of Europe's new space located in these two countries in 2013, Knight Frank reports.

Overall, however, new development in Turkey and Russia is expected to drop to 34 percent by 2015.

"Favorable market conditions will not necessarily translate into a wave of new retail development across Western Europe in the same way experienced in previous periods of economic recovery," James Brown, head of EMEA Retail Research and Consulting at JLL, said in the report. "Structural change is still playing out, retail is being redefined, developers will be cautious, as will lenders on new developments."

Russia is expected to have the largest shopping center stock in Europe by 2015. Last year, the market witnessed 1.6 million square meters of new space, increasing 11 percent from 2012.

Germany has the largest shopping center development pipeline in Western Europe over the next two years. This year approximately 613,000 square meter are expected to open, with another 919,000 square meters forecast for 2015. This is up significantly from the 295,000 square meters delivered in 2013.

"Redevelopment is the new development for most established markets, as tired stock loses appeal and deferred capital expenditure comes home to roost," Robert Bonwell, CEO EMEA retail at JLL, said in the report. "Redevelopment of existing large scale retail assets will become a key part of Asset Management in a retail market that is being redefined through multi-speed economic growth, increasing urbanization and rapid technological change."