According to CBRE, the first half year results pushed commercial real estate investment volumes in Central & Eastern Europe (CEE) (excluding Russia) to â¬2.5bn, an increase of 15% on the same period for 2013.

Romania saw the greatest rise in commercial property investment volumes with close to 300% increase year-on-year, however, coming from low levels of activity. This can be explained by continued low interest rates, increasing allocation of institutional investors to real estate, relatively high yields and the belief that economic growth should be solid in the coming years.

The Czech Republic and Hungary also saw significant increases in investment volumes with uplifts of 36% and 35% respectively. These two countries in particular have benefitted from the challenge that many investors have had in finding the product they are looking for in Poland. This lack of supply has had a positive impact on neighboring countries, which also can offer more attractive yields in the current market.

Despite these increases, Russia and Poland continue to dominate commercial property investment in the region. Together they account for over 60% of the investment volume at â¬1.2 billion and â¬1.1 billion respectively. Poland's real estate market continues to attract strong investment and the Polish economy - after a slight dip in recent quarters - is moving back into growth mode. Poland has moved away from being a niche market and continues to mature into one of the core investment locations in Europe. Russia, however, saw investment flows fall almost 60% over the first six months of the year. This is largely due to the well-publicized tensions with the Ukraine, but also reflects the irregularly high transaction activity in Q1 2013. 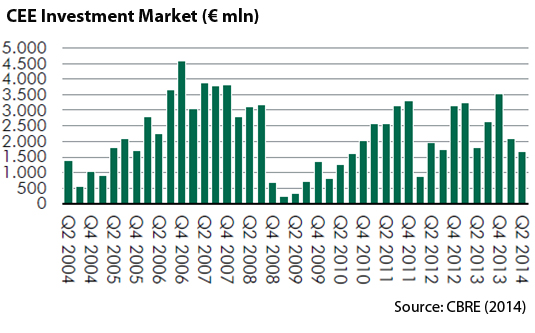 CEE Capital Markets Director Mike Atwell said, "The CEE investment market continues to benefit from a renewed interest from traditional CEE investors, but more recently the market has also begun to see new sources of global capital coming into the region. Poland remains the dominant market with numerous transactions ongoing and the forecast is for an overall increase in volumes by the end of 2014."

Jos Tromp, Head of CEE Research & Consultancy commented, "Continued low interest rates, combined with an improved economic outlook, has ensured commercial real estate remains a favored asset for investors.  Within the CEE region, we believe that investor interest is actually stronger than the H1 2014 data suggests. Almost all markets have shown increasing liquidity levels, with the exception of Russia, which was clearly adversely affected by the Ukraine crisis. It is also important to remember that Russian deal flow was abnormally high for the same period in 2013. However, until the situation in the Ukraine settles down we expect cross-border investment into Russia to remain relatively slow".