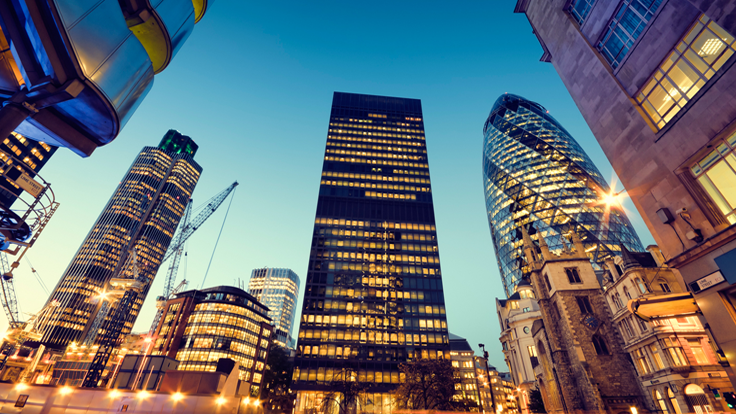 
Despite the struggling economy, commercial property deals hit the highest level in the second quarter since 2007, led by international investors, Cushman & Wakefield reports.

Trading volume hit €32 billion for the three month period, a 4 percent decline from the first quarter but an 8.6 percent increase from the same quarter a year ago. Foreign buyers increased their spending by 15 percent, compared to a 5 percent rise in domestic activity, Cushman & Wakefield said.

Investors are "expanded their buying horizons," taking on more risks and pushing up prices in the process, the firm said.

The global pension, insurance and sovereign wealth funds driving deals are focusing on France, Germany and the U.K., which accounted for 62 percent of the deals in the quarter.

But there was a jump in other areas, with transactions up 94 percent in southern Europe on the quarter, 70 percent in Benelux and 30 percent in the Nordics.

"Many investors are still heavily focused on core markets but more and more are looking further afield for opportunities," said Jan Willem Bastijn, head of capital markets at Cushman & Wakefield, EMEA, "with Central & Eastern Europe strong in the first quarter for example but some of the distressed Club Med markets bouncing back in the last quarter, led in particular by some notable office deals."

With "more equity buyers coming into the market and debt somewhat easier to obtain," Cushman & Wakefield is raising its forecast for total trade volume for the year from €136 billion to €142 billion.

Retail and industrial space has been driving deals, but that is changing with more office deals in the quarter accounting for 47 percent of deals.

"While property values stabilized in the opening months of the year, pressure is now mounting for prime property yields to fall," said David Hutchings, head of European research at Cushman & Wakefield. "In the medium term this will be justified by the lack of recent development which is sure to underpin an eventual return of rental growth as occupiers grow in confidence, but you don't need to buy into the economic recovery story to understand the charms of property." 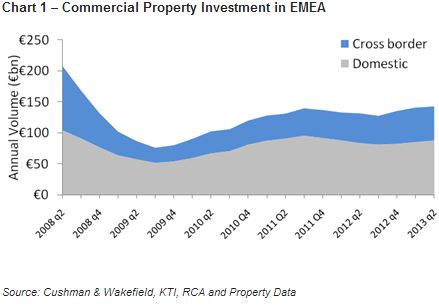 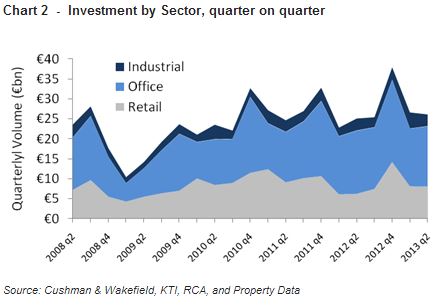 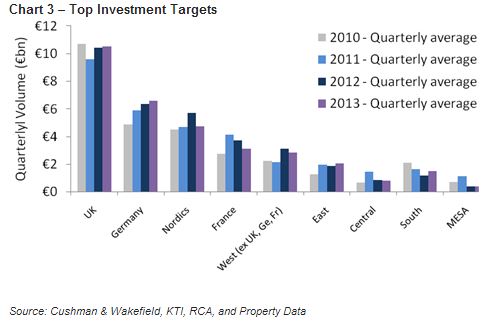