Based on recent estimates from Cushman & Wakefield's Corporate Finance team, European banks and asset management agencies have a gross exposure of $770 billion (€584 billion) to non-core real estate which is subject to disposal or work-out strategies.

The findings, published in the firm's European Real Estate Loan Sales Market H1 2014 update, reveal that despite the record volume of commercial real estate (CRE) and real estate-owned (REO) sales seen so far this year, the deleveraging process throughout Europe is far from over.

Cushman & Wakefield Corporate Finance carried out extensive research into the non-core real estate exposure of 46 banks and asset management agencies throughout Europe for the in-depth report.  The nine European 'bad banks' analyzed hold over 46% of the total gross exposure to non-core real estate, indicating their importance in the CRE loan and REO sales market in the next few years. 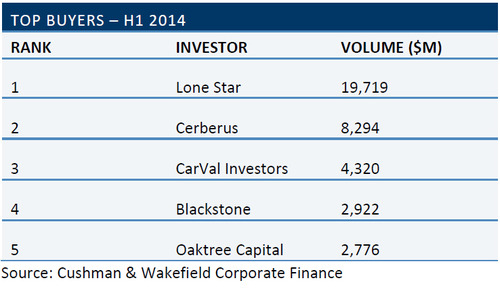 The publication details eight 'mega-deals' - those with a face value over $1.3  billion - which have closed in H1, while another four are currently being tracked.  These 'mega-deals' accounted for 71% of the total H1 loan sale volume; this is up from 40% in H1 2013.

Contrary to the trend observed across Europe in 2013, the average size of loan sale transactions has increased in H1 2014 to $818 million from $455 million in the same period last year - this makes it even more difficult for smaller investors to participate in the sales process.

Large US investors such as Lone Star and Cerberus continue to grab the headlines, accounting for 77% of all European CRE loan and REO acquisitions in H1 2014.

Frank Nickel, Executive Chairman of Cushman & Wakefield's EMEA Corporate Finance group said, "US investors have raised an enormous volume of capital targeting opportunistic real estate.  'Mega-deals' prove popular to these buyers since they offer a chance to gain large exposures to key assets and markets in one transaction, saving on both costs and time."

Following a record first quarter dominated by IBRC, Q2 saw activity spread to Southern Europe as vendors look to take advantage of increasing investor appetite in the region.  As a result, Cushman & Wakefield's Corporate Finance team estimates $21.4 billion of sales completed in the three months to July, over six times the volume closed in Q2 2013 ($3.3 billion). 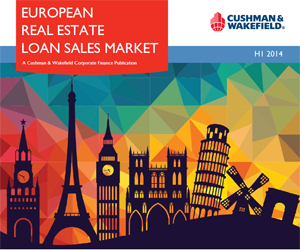 A highly active H1 has led to Cushman & Wakefield Corporate Finance forecasting that closed CRE and REO sales are now likely to reach $79 billion in 2014.

Cushman & Wakefield's Federico Montero, Head of Loan Sales, EMEA Corporate Finance said, "The record loan sales volume seen so far in 2014 has been impressive, although the non-core real estate exposure of 770 billion across Europe signifies the enormity of the deleveraging process still to occur.  Additionally, the upcoming stress tests being enforced by the ECB will guarantee that the current high levels of activity in the market will be sustained in the next few years."