According to JLL's International Capital Group, German investors have pumped over $151 billion into international real estate over the last decade. From early 2004 to today, the Germans have outpaced U.S., Middle Eastern and Asian commercial property investors, making them the most active and important source of cross-border capital.

German groups have continued to invest outside of its domestic market during the last ten years even when other investors have reigned in cross-border activity. This has put them ahead of capital outflow from North America ($133bn) and UK ($100bn) sources.

Despite a widespread investment policy targeting over 40 countries, 82% of German outbound investment has been allocated to mature markets found in Western Europe and North America. The majority (80%) of German capital flows have targeted core office product, with retail investment accounting for a further 13%.

Matt Richards, JLL's Head of International Capital Group Europe says, "Despite being challenged by Norwegian, Chinese and Canadian investors, with their established presence in many global property markets we anticipate German investors will maintain their international investment focus."

Domestically, German investors also dominate their local market. Since 2004, German capital has accounted on average 52% of real estate investment in Germany. However, JLL analysis of under bidder activity suggests that international demand is stronger than purchaser figures indicated. According to data collected from â¬1.3 billion of office transactions above â¬100 million in the last 18 months, 65% of purchasers were domestic. 72% of the under-bidders were cross-border investors from USA, Korea, UK, China, Czech Republic, Canada, France and other countries. These underbids totaled almost â¬7 billion (see figure 10 & 11 below).

Marcus LÃ¼tgering, JLL's Head of Office Investment in Germany says, "The amount of capital allocated to real estate continues to grow at a global level. We expect the cross-border flow of investment targeting Germany to increase, as traditional investor groups from Europe and North American and newer entrants from Asia and the Middle East start to bid more aggressively and secure assets which previously might have ended up having domestic owners." 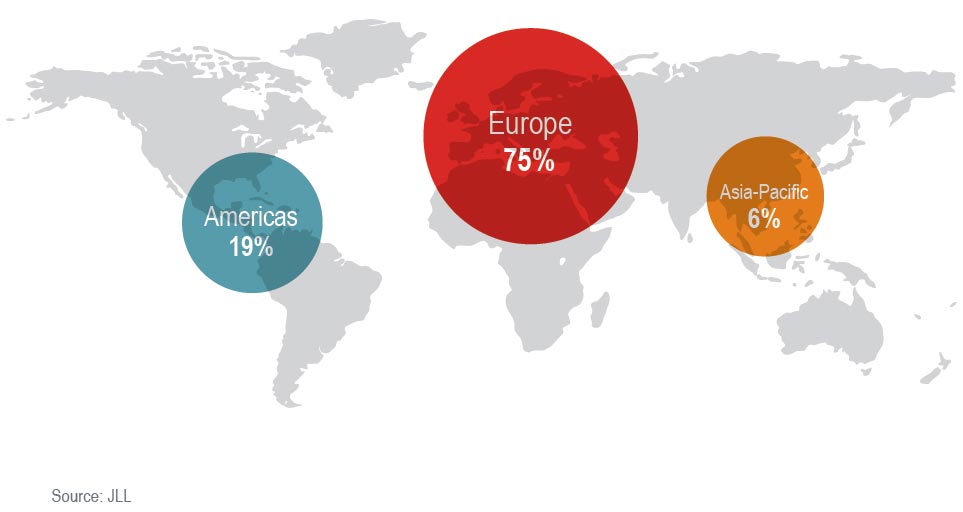