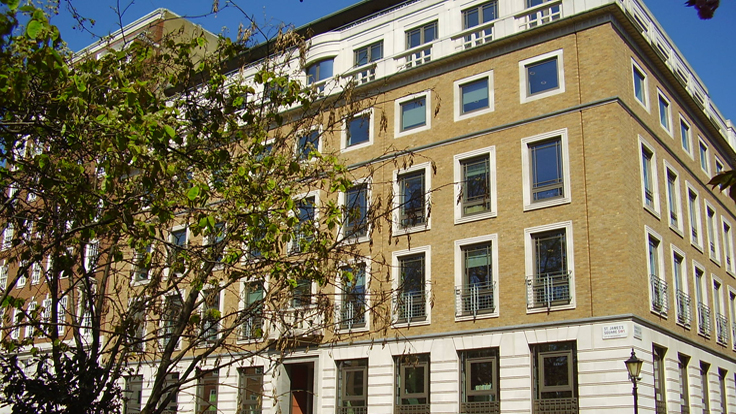 With the average cost of $194 per square meter per year, St. James, tops a list of the world's top 12 most expensive locations in the world, beating areas in Hong Kong and Beijing, according to a report from Jones Lang LaSalle.

The locations topping the list are benefitting from a scarcity of available space and strong demand from the growth in niche financial and technology sectors driving office prices higher across the globe, JLL reports.

The firm expects the same mix of locations to top the list in the short term, sector-specific markets like Silicon Valley in California are climbing the rankings. Tech-driven Menlo Park in Silicon Valley currently ranks fifth on the list.

"With premium rents in the central business districts of a number of U.S. cities now increasing, we can expect to see additional U.S. markets ranking among the most expensive over the next 24 months," JLL director of research Jeremy Kelly said in the report.

As some markets climb the list, changes in global market dynamics can adversely affect other office areas, JLL said.

"Tokyo was the most expensive market for office space in the world for many years," Kelly said, "but it was hit hard by the global financial crisis and has been surpassed by other Asian power cities."

A report from CBRE this summer showed central Hong Kong was the most expensive office market in the world. It ranks second in the JLL report, which focused more on specific neighborhoods.

5. Menlo Park, SILICON VALLEY, CALIFORNIA (USD $111 per sq. ft. per year)
The epicenter of the technology universe, Sand Hill Road in Menlo Park is home to many venture capitalists.

6. Kremlin Area, MOSCOW: USD 1,150 per square meter per year (USD $107 per sq. ft. per year)
Office space in Moscow's Kremlin area is popular with Russian and international finance and legal tenants. New construction is tightly restricted, and that has helped further boost the value of office space in the area.

8. Raffles Place/Marina Bay, SINGAPORE: SGD 11 per sq. ft. per month (USD $103 per sq. ft. per year)
The heart of Singapore's financial district is served by a world-class subway system and is a vibrant environment for work, living and play.

10. Marunouchi, TOKYO: JPY 28,600 per tsubo per month (USD $98 per sq. ft. per year)
Marunouchi, located on the west side of Tokyo Station, is a long-established office precinct where the lower floors of buildings typically house luxury retail, and higher floors are office space.

11. Uraniastrasse and Paradeplatz area, ZURICH: CHF 900 / per square meter per year (USD $91 per sq. ft. per year)
Uraniastrasse and the area round the Paradeplatz in the core CBD of Zurich feature excellent accessibility and amenities, with office space heavily dominated by the banking sector and private wealth management.

12. Lujiazui, SHANGHAI: RMB16 per square meter per day (USD $87 per sq. ft. per year)
Lujiazui was transformed from empty grassland to a bustling financial district in just 20 years and is now Shanghai's largest CBD, home to 650 Chinese and international financial institutions.