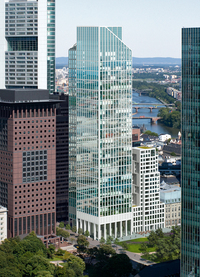 Joint venture partners Tishman Speyer and Commerz Real AG today laid the foundation stone for the "TaunusTurm" office tower, which will be the latest addition to Frankfurt skyline.   Located in the heart of Frankfurt's banking district, the 40-story, 650,000 square-foot (60,000-square-meter) tower is scheduled to be delivered by the end of 2013.

In the presence of 350 invited guests, Petra Roth, Mayor of the City of Frankfurt, and architect Martin Gruber joined Jerry and Rob Speyer, Co-CEOs of Tishman Speyer, as well as Jochen Klösges, a member of the Commerzbank AG Board of Managing Directors, in lowering the copper foundation stone capsule through a Plexiglas tube into the 10-meter-deep construction pit.

For Tishman Speyer, TaunusTurm represents the third phase of what has proven to be an enormously successful development initiative in Frankfurt, preceded by the MesseTurm and OpernTurm projects.

To be located at the corner of Neue Mainzer Strasse/Taunustor and the "Wallanlagen", the park belt, TaunusTurm will be the first building on Neue Mainzer Strasse to have its 13-meter-high entrance facing the adjacent park. The slender tower with a white natural stone façade, which was designed by the Frankfurt firm Gruber + Kleine-Kraneburg Architekten, is expected to be the first new high-rise in the city to be awarded LEED Platinum certification.

The construction of TaunusTurm will considerably upgrade the Wallanlagen - the adjacent former city fortifications. Part of the plot of land will be used to extend them and make them accessible by means of a new promenade along the entire row of buildings.  Amenities in the form of a restaurant for staff and guests, and a business club with conference space will enhance the property. Next to the TaunusTurm, Tishman Speyer is developing a residential tower, with an entrance aligned to the park, making it a prime address on Frankfurt's unique park belt.

Petra Roth, Mayor of the City of Frankfurt, emphasized the entrepreneurial vision of Tishman Speyer and Commerz Real. TaunusTurm, she said, integrates a new urban space for work and life into the existing fabric of the city and gifts future residents, employees and guests a great deal quality of life: "The entire development of the TaunusTurm project is infused with the notion of sustainability. It is precisely this which a center such as Frankfurt really needs: Investors who believe in the potential of the place." Mayor Roth insists that such vision will spell a strong competitive edge: "In keeping with the claim of 'Be Inspired' TaunusTurm is already a massive success for the City of Frankfurt as it not only creates hundreds of jobs but at the end of the day will be an impressive new landmark for the city."

In a joint statement, Jerry and Rob Speyer, Co-CEOs of Tishman Speyer, said, "Frankfurt is one of Europe's great cities and its importance as a key financial center will undoubtedly keep growing during the coming years.   We continue to pursue a strategy of developing and owning premier properties in world-class cities, and this project is consistent with that strategy, while it satisfies Frankfurt's growing need for high quality office space that is architecturally superior, flexible, efficient and sustainable."

Jochen Klösges, Member of the Management Board of Commerzbank AG, highlighted the special location of TaunusTurm and the responsibility that comes with it, commenting, "It has been of major concern to us to implement a project in this prominent location in the banking district on a property formerly from our corporate portfolio that would guarantee complete success. The conditions have been met perfectly: The striking architecture, the quality of the space, and the alignment toward Taunusanlage are proof of the great attractiveness of TaunusTurm."

"Be Inspired - by seeing what is! We as architects are constantly moved forward by our visions. Creating a new location, imagining it from nothing, now that is always the search for the special, for the essentials. At this location, right here, we see the great opportunity to design and build a sculptural high-rise, a shape that contained multiple uses, right in the heart of the city of Frankfurt. TaunusTurm brings all this together and can be read as a metaphor for contemporary economics and aesthetics," commented Martin Gruber of Gruber + Kleine-Kraneburg Architekten.