The desire to own a trophy house and furnish it with world-class artworks is not a new one. Both, if bought wisely, combine satisfying lifestyle choices with handsome investments. Now figures from Christie's International Real Estate demonstrate just how close the symmetry in demand for these two asset classes is, with prices for both rising over 20 per cent in the past twelve months. Wealthy buyers from emerging countries are joining with those in more established markets to keep prices of fine art and luxury homes buoyant.

A report released by Christie's International Real Estate (CIRE) in April 2014, Luxury Defined: An Insight into the Luxury Residential Property Market, shows that luxury real estate has a far stronger correlation with the elite end of the fine art market than it does with the general housing market. 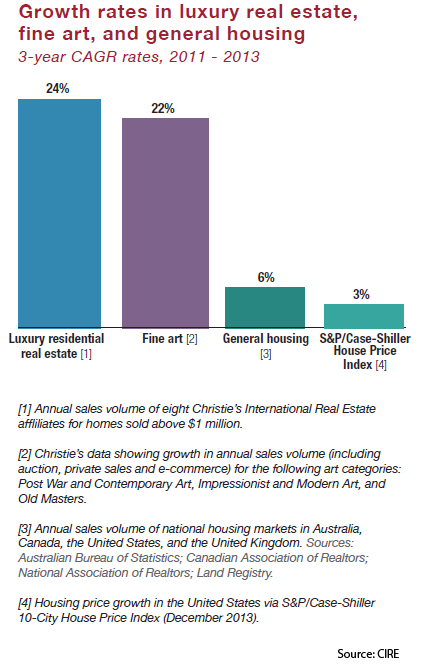 "The top end of the fine art market experienced a resurgence similar to luxury real estate in recent years as the world's wealthy turned to investments offering uniqueness, craftsmanship and experiential luxury," explains Joachim Wrang-Widen, Senior VP at CIRE. "Both markets are driven by limited stock and high demand and are assets of passion and lifestyle. As with a masterwork of art, the provenance and quality of a prized residence drives prices at the very top of the market."

Christie's, the only real estate network wholly owned by a fine art auction house, compared the three-year compound growth rate in fine art sales and residential sales of properties over US$1 million with the general growth rate in house prices.

These figures revealed that sales volumes of luxury homes increased by 24 per cent and fine art sales by 22 per cent. In comparison, over the same period, general housing sales in the US, UK, Canadian and Australian markets rose by 6 per cent while the S&P/Case-Shiller 10-City US House Price Index recorded a 3 per cent increase.

Global art sales last year totalled â¬47.42 billion making 2013 the second strongest year on record. This figure was only marginally behind the â¬48.07 billion highs set in 2007 according to data from the TEFAF Art Market Report conducted by the European Fine Art Foundation.

Highlights of global art sales in the past twelve months include the two most expensive works ever sold at auction: Francis Bacon's triptych "Three Studies of Lucian Freud" which sold for $142.4 million in New York in November, going to an unidentified buyer for $50 million over the pre-auction estimate and $119.9 million set by Edvard Munch's "The Scream" in May.

Property sales in the top price brackets also continued to improve helped by limited inventory, low interest rates and pent-up demand says Bonnie Stone Sellers, CEO of CIRE. "If 2012 was the year when the highest end of the luxury market came back to life, 2013 was the year when the rest of the luxury market flourished with robust growth in the number of $1 million-plus sales," she comments.

International buyers showed their commitment to buying in urban areas in particular with 70 per cent of high net worth individuals investing directly into cities. This trend was identified in PwC's and The Urban Land Institute's Emerging Trends in Real Estate 2014 report identified which highlighted that 61 per cent of millionaires live in urban areas and show a preference for a home in a "walkable, urban area". Christie's research shows a combined annual unweighted average growth rate across London, Los Angeles, New York, Paris and San Francisco of 31 per cent.

New Buyers in The Market

Art market data firm Artprice describes New York as the "epicentre" of top level art sales, hosting 39 of the best 50 auctions last year. The USA has dominated the art market for twenty years and while it remains the largest art market with 39 per cent of the market by value, China now accounts for nearly 24 per cent of art sales. Although the meteoric increase of Chinese buyers in the market slowed in 2012, they remain the most significant of the newer art markets according to TEFAF.

In 2012 sales of Old Masters at auction houses Christie's and Sotheby's increased up 56.5 per cent with emerging markets such as the UAE, Mexico and Brazil joining China to contribute substantial numbers of new buyers to the market comments Lisa Dennison, Chairman of Sotheby's North and South America.

"Looking forward the art market, particularly at the upper end, is expected to remain strong," states consulting firm Cap Gemini in their latest World Wealth Report. "Demand outstrips supply because of the rarity of masterpieces but also because their owners are often unwilling to sell, given the difficulty of finding assets with comparable return of characteristics."

That, concludes Wrang-Widen of CIRE, is equally true of top-end global property and is why he believes that luxury residential real estate, perceived as a "safe haven" investment, demonstrates particularly strong growth potential.