According to London-based Knight Frank's Prime Global Rental Index, residential markets across the globe enjoyed an uptick in rental rates in the third quarter of 2011.

In contrast to its robust annual growth, the index saw just 0.4% growth in the three months to September. This could suggest a new phase of weaker growth due in part to the worsening global economy. However, if we omit Cape Town from the index, quarterly growth was a respectable 1.6% indicating sovereign debt issues and the fragile state of the global economy have yet to weaken either tenant demand or investor sentiment.

In terms of rental performance there are some stark regional and city-based variations, a gap of 33 percentage points splits Geneva, the highest ranked city, and Cape Town the lowest. The top end of the South African rental market is largely corporate-driven and Cape Town has suffered from large cuts in relocation budgets. Unlike in previous quarters there is little homogeneity on a continent-by-continent basis.

African cities Nairobi and Cape Town, for example, are positioned at opposite ends of the rankings and so too are Geneva and Moscow in Europe. Each city's performance is being driven by a unique set of variables, from local supply-and-demand dynamics to economic growth and, crucially for the prime rental market, employment conditions.

Geneva's strong performance can in part be attributed to the strength of the Swiss economy, which has ridden the economic storm better than most European countries. It remains untouched by the current debt crisis, which has helped boost its credentials as a safe-haven.

In London's case the prime rental market has benefited from the weak pound, which has attracted both overseas investors and foreign tenants in large numbers. In 2011, 59% of all properties let by Knight Frank in London were let to international tenants of over 61 nationalities.

Asia provides a mixed picture with Hong Kong and Singapore recording more muted growth. In the past 12 months, annual rental growth has shifted from 18.1% to 10.6% in Hong Kong and from 17% to 4.8% in Singapore. China's main cities of Beijing and Shanghai by comparison are seeing the rate of rental growth rise, although it remains to be seen whether the government-imposed regulatory measures that are having the desired effect of softening prices will filter through to rents. 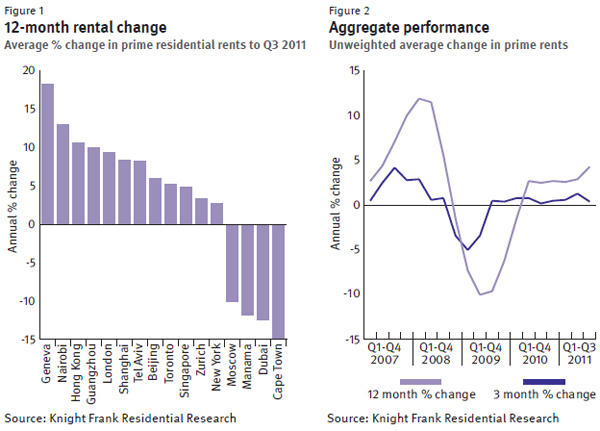 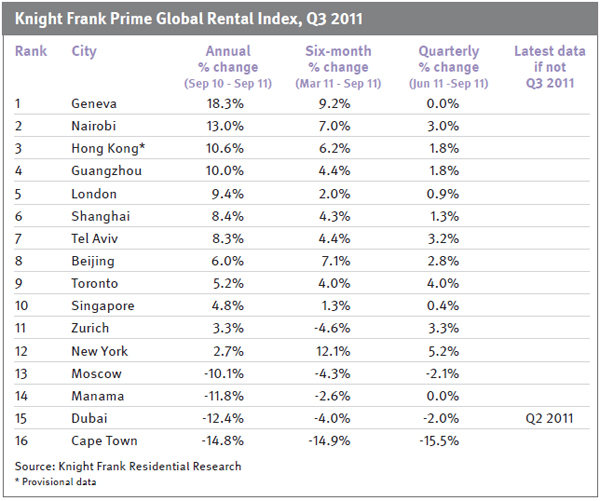