According to international real estate adviser Savills, London has become the world's most expensive city for companies to locate employees, overtaking Hong Kong, which had previously topped the ranking for an unbroken five year period. New York and Paris complete the pack of four leading cities, where the combined costs of renting residential and office space top US$100,000 per employee per year.

These four cities have dominated the Savills Live/Work Index top 12 world cities since its launch in 2008, reflecting the relative stability of both the residential and commercial markets of more mature global cities post downturn compared to the more recently emerged new world cities, Savills says in a new report, 12 Cities,  published today.

The index measures the total costs per employee* of renting living and working space on a US dollar basis in 12 world cities.  Fluctuations in total live/work costs reflect not only the strength of a city's residential and office markets and occupier taxes and costs, measured at a local level, but also the impact of fluctuating exchange rates on the cost of doing business on a world stage.  It is this that has contributed in large part to London's recent ascendency in the rankings. 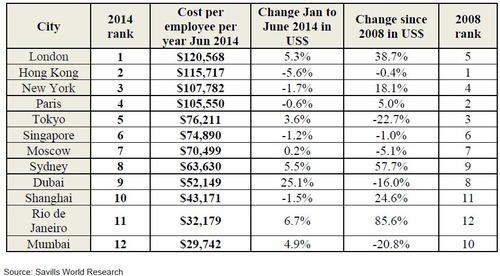 A combination of falling residential rents and, most importantly, a weakening currency, has boosted Hong Kong's competitiveness, with total real estate costs down -5.6 per cent in the first six months of this year, an annualized rate of -11.2 per cent in dollar terms.  The Savills Live/Work Index shows that the current average price of renting residential and office space in Hong Kong is back to 2008 levels, at US$116,000 per employee per year.

By contrast, London real estate costs grew in US dollar terms by an annualized rate of 10.6 per cent in the first six months of the year so London has now become the most expensive world city in which to accommodate staff, at US$121,000 per year.  This was largely due to the UK pound's recent appreciation against the US dollar.  Overall, the US dollar cost of residential and commercial accommodation in London has increased by 39 per cent since 2008.  Despite its climb in the rankings - from 5th to 1st place since 2008 - London is still a way off the live/work accommodation costs record, set by Hong Kong in 2011 at US$128,000 a year.

Hong Kong remains the only 'New World' city, from a recently-emerged or emerging national economy, to feature in the top five cities.  Its position relative to the emerging markets of mainland China mean that it is unlikely to lose this status in the foreseeable future, despite property market cooling measures.  The city remains by far the most expensive city in which to buy residential property, with prices 40 per cent higher than London - but the gap is narrowing.

Tokyo has fallen down the rankings (from 3rd to 5th position), as rents were falling or stagnant after 2008 and fell by 23 per cent in US dollar terms.  Recently, however, the economic policies adopted by Prime Minister Shinzo Abe (Abenomics) have yielded improved economic conditions and spurred rental growth. Falls in the Yen have made Tokyo costs more competitive, but rental growth still provides incentives for investors, especially local ones.  At US$76,000 per person, it is significantly cheaper for businesses to locate in Tokyo than in any of the leading group of four cities. 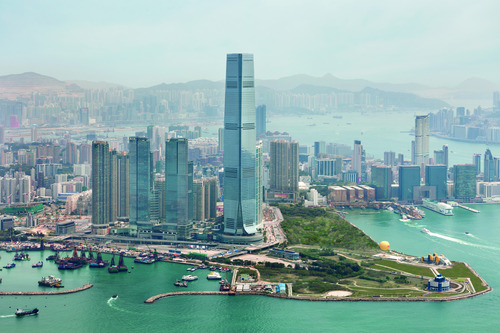 At the other end of the table, comparatively affordable Rio de Janeiro and Sydney have seen significant increases in live-work costs since 2008, up 85 per cent and 58 per cent respectively, though Rio still looks highly competitive at just US$32,000 per person.  Mumbai retains its position as the cheapest world city, at US$30,000 per person per year, down -21 per cent in US dollar terms since 2008.

"This year has seen much more modest real estate price growth in nearly all our world cities and some have shown small falls," says Yolande Barnes, Director Savills World Research. "We expect this subdued trend to continue as investor interest and market activity shifts to second-tier cities.

"This lower level of price growth means that currency fluctuations have produced some of the biggest changes in our rankings which are expressed in dollar terms.  For multinationals looking at their local costs, it is this which is likely to exercise them more than property markets over the next year".