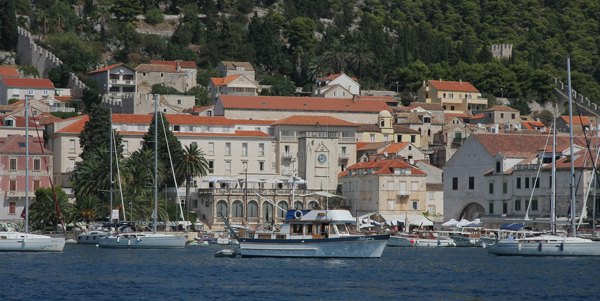 Lost In Time On the Dalmatian Coast 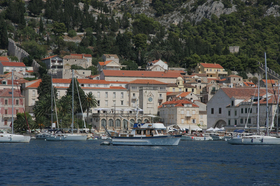 Hvar has a stupendous natural back-drop. (Courtesy Croatian Tourist Board)

Twenty years ago, this coast was trampled by the footsteps of soldiers, and pock-marked by the scars of war. Now, though, the Dalmatian Coast of Croatia - which wasn't yet an independent country in those days - has taken its place among the famed "coasts" of Europe.

Here, the ambience is an endearing mix of ancient architecture and buzzing Vespas, of cliffside villages and mega-yachts, of cobblestoned streets worn smooth by the ages and nightclubs that never close. Of some 350 miles of beach and a thousand islands (17 of which are inhabited), each with its own distinct history, architecture, and special flavor.

The biggest city on the Dalmatian Coast is Dubrovnik, a white-washed, cliff-hugging, seaside city now considered Europe's most beautiful by many. Overlooking the Adriatic from behind ancient fortress walls, Dubrovnik's streets have been trod by a dozen conquerors over the ages, from the Romans to the Venetians to the Austro-Hungarians to the Germans. Many have left their marks on the city's architecture. The Roman influence, for example, is evident in Gundulic Square (which transforms from a café-centric social center at night into a colorful farmer's market by morning), and the orange rooftops are reminiscent of Tuscany.

In many of Dubrovnik's ancient streets, you'll be enveloped by the aromas of jasmine or lemon trees, and pushcart vendors selling the ubiquitous olive soap. And you'll come across fascinating cultural clashes every time you turn a corner, from the stolid medieval monasteries to the eclectic bars filled with millionaires just off their yachts. 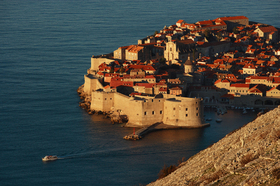 The ancient city of Dubrovnik juts out into the blue Adriatic. (Courtesy MIR Corporation)

The islands of the Dalmatian Coast are linked by a ferry system, making many of them accessible from Dubrovnik. One of them is Brac, which, until recently, was known mostly for its white-marble quarries. Now, though, Brac's biggest signature is its beach, called Zlatni Rat - "Golden Cape" - populated by the beautiful people. Your ferry will dock at the small town of Bol; from there you can head into the mountainous interior for some exploration.

Hvar is considered the "hippest" island on the Dalmatian Coast. As your ferry edges into Hvar harbor, you'll see thousand-year-old towers and alleys back-dropping a fleet of yachts the size of football fields. And you'll smell the island's ubiquitous aroma of lavender, growing wild all over and spilling from the tops of pushcarts.

On the island of Korcula, the predominant scent is that of pine. Korcula is anchored by the town of the same name, with a stone-wall-enclosed Old Quarter dating back to Venetian rule in the Tenth Century. In this part of town, the streets are narrow and winding and dotted with green windowsills and shutters, and adorned by arched bridges and ornate balconies. The town of Korcula claims to be - along with a dozen other European towns - the birthplace of Marco Polo. 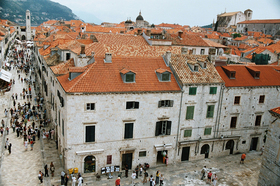 It's all here, on Europe's hottest "Coast."