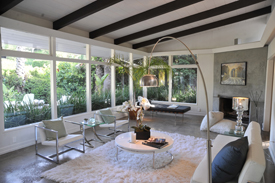 A Good Judge of Fine Houses


(LOS ANGELES, CA) - By day, her "Malcolm in the Middle" character, Lois, ruled the roost in an unkempt house on a suburban block. But after work, actress Jane Kaczmarek returned to an Italian Renaissance Revival villa in sedate San Marino, Calif., more in keeping with her role as a judge on "Raising the Bar." Now Kaczmarek and actor Bradley Whitford have put the estate on the market at $6.7 million.

The elegantly appointed 1924 mansion sits on more than an acre of land. Original formal gardens border the back lawn, which leads to a swimming pool, a spa, a secluded guesthouse and additional gardens. The 5,593-square-foot main house and the guesthouse total 6,769 square feet of living space. There are six bedrooms -- three family bedrooms, two maids' rooms and one in the guesthouse -- plus six bathrooms.

The main hall features a sweeping staircase, coffered ceilings and an inlaid patterned floor. The library has walls of leaded glass.

Dylan McDermott, who stars in the police drama "Dark Blue," is moving his production company into a 2,200-square-foot loft at Dogtown Station in Venice, Calif.

The two-story space in the gated live-work development has 18-foot-tall glass walls and polished concrete and hardwood plank floors. Terms of the deal were not available, but similar-sized two-bedroom, two-bathroom units are priced at about $1.1 million. Each unit has a private rooftop deck.

The open floor plan can be customized for McDermott's D26 Productions.

McDermott, 48, is working on the second season of the TNT series. He also starred in the legal drama "The Practice" (1997-2004), for which he won a Golden Globe award.


Director is Hoping for a Bite 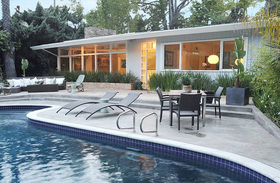 Director-producer Marcos Siega and his wife, Lisa, have put their Sunset Strip-area home on the market for $1,985,000.

The post-and-beam Midcentury house has an open beam ceiling, an open floor plan, a remodeled kitchen and walls of windows overlooking a swimming pool, patio and garden. There are four bedrooms, three bathrooms and 2,628 square feet of living space.

The Siegas are selling because they would like a larger family home.


Leaving His Orbit in Hidden Hills

Actor Beau Bridges and his wife, Wendy, have listed their country English-style home in gated Hidden Hills for $3.25 million.

Designed by architect Marshall Lewis and built in 1976, the house has a sunken den with a fireplace, a bar, a family room, a billiard area, an office with a wine closet, a sauna, six bedrooms, six bathrooms and a maid's room in about 7,000 square feet of living space.

French doors open off the dining room to a patio. The yard, more than an acre, includes a swimming pool, a north-south tennis court and a greenhouse.


He Sells His Piece of 'Wild West'

Update: Actor Robert Conrad and his wife, LaVelda, have sold their equestrian property in Thousand Oaks, Calif., for $1,955,000, the MLS shows.

The Mediterranean home, built in 1996, sits behind gates on 3 landscaped acres with a free-form swimming pool and spa. The two-story entry has a sweeping staircase. There are five bedrooms, 4 1/2 bathrooms and 4,605 square feet of living space.

The property came on the market in November at $2.25 million.